My Cat is an Arsehole - Case File 3


For this week's case file I'd like to welcome Catherine Winther and her bad kitty, Magiska Bear.
Case File 3 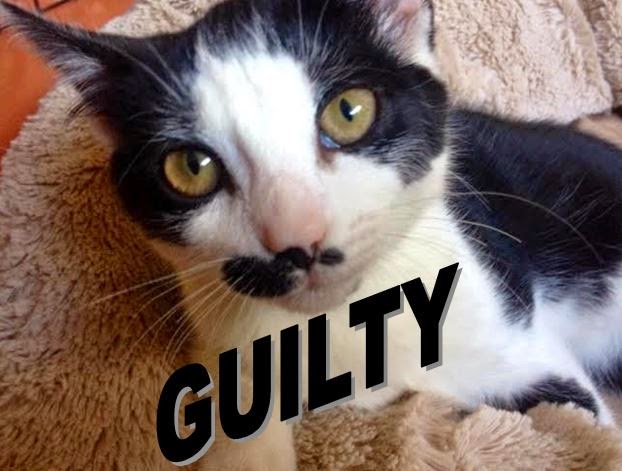 Hunting and Killing...teabags.
Magiska-Bear may look sweet, but this kitty is a cold blooded killer, for tea-bags anyway. Not even used tea-bags are spared.
Below is photographically documented evidence of Magiska-Bear's crimes. Also provided is evidence of the carnage left behind when Magiska-Bear is left alone with a tea bag for only a few moments.

Disclaimer:
I have included what I deem to be disgustingly cute photos of Magiska-Bear (not kinky and totally safe for work). I rescued her from under my house (she was a feral kitty). I have hand reared her and she is a constant purr machine. She even purrs when being injected at the vet. So, I love her because she is tiny, cute, a purr machine, hilarious and my writing familar.

PS I also have a giant black cat called Batman. He is much more stealthy than Magiska so trying to get photographic evidence of his crimes is a lot harder.

If you'd like to find out more about Catherine Winther, check out her blog HERE.
Posted by Nicola E. Sheridan at 7:00 AM 2 comments:

Email ThisBlogThis!Share to TwitterShare to FacebookShare to Pinterest
Labels: Catherine Winther, Magiska Bear, My cat is an arsehole


Kazakhstan is in Central Asia. 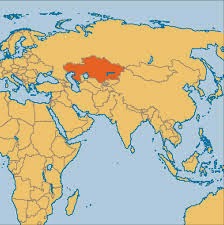 In my research tonight, I've discovered a really lovely mythology.

The legend of the World Tree. 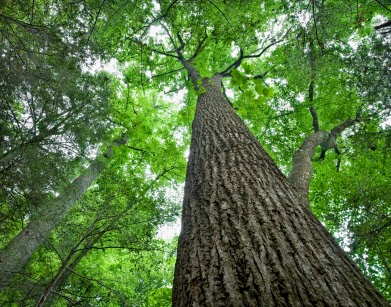 Baiterek is the the name of the World Tree and literally means 'original poplar or mother poplar' (poplar being a genus of tree).

From what I understand of my readings (you can check out my resource websites below) the World Tree connects the three levels of spiritual existence,  heaven, earth and the underworld, or upper middle and lower existences respectively.

According to myth, Baiterek is the original life form and was once considered the centre of the universe as well as the gate or door between worlds.

Legends of heroes are often found around Baiterek. One such is a hero who finds himself in the underworld and makes a long and  difficult journey to the middle world. There, he finds a tree, and saves the chicks of a giant mythological bird (Simurgh), by killing a dragon (Aydakhar) that threatened to devour them. The mother Simurgh is so grateful that she takes the hero to heaven. [FYI I did a post on the Simugh - a while ago HERE ]

Baiterek – the world tree – is according to this legend the center of the universe. It is the gateway between the astral and physical realms of existence and it is for this reason that sacred rites (including giving birth) were once performed underneath poplar trees in the region.

Kazakh shamans used to believe that the world tree appears as a material thing an ‘asa tayak’ and may be represented by the placement of a tall pole in the grown near the tomb of a holy individual.

Rather wonderfully, in Astana Kazakhstan, there is a structure that represents Baiterek. 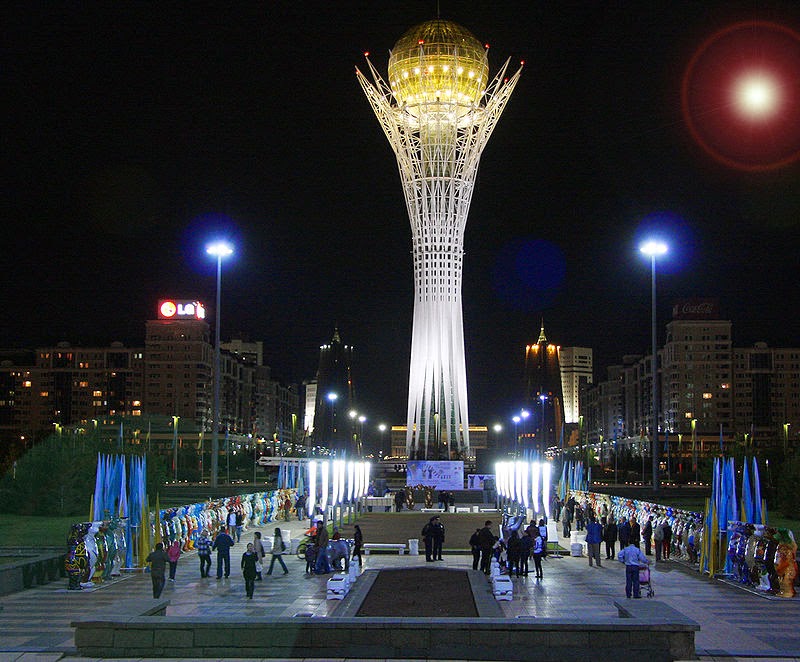 It is an approximately 105m tall structure that rises from within a raised plaza in the centre of town. It is made up of a narrow cylindrical shaft (which contains elevators), surrounded by white branch-like girders flaring out in a tree like fashion at the top. Within this, is a 22m-diameter sphere. Apparently, you can buy tickets at the base and visit an observation deck within the 'egg' itself. The 'egg' of course represents the eggs of that benevolent simurgh bird the hero rescued from the dragon who lurked beneath the tree.  Interestingly, the simurgh also called Samruk, are also known as the 'bird of happiness' in this particular mythology.

Unfortunately there didn't seem much else on Kazakh mythology available on the internet, but what I noticed was that many of the traditional Kazakh mythological creatures were winged. Winged horses, winged tigers and birds seem prevalent in their art.

If you're wondering about Kazakstan here's a ridiculously simplified run down. It's a large Central Asian country sandwiched between Russia, the Caspian Sea, Uzbekistan and Kyrgzystan and China. Originally inhabited by nomadic tribes people this changed in the 13th Century when Gengis Khan settled people there. Since then there have been multiple shifts in population habits. In the 19th Century it was occupied by Russia. However with the dissolution of the Soviet Republic, Kazakhstan became independent in 1991.

It looks like a fascinating place, with mythology ripe to be explored!

My Cat is an Arsehole - Case File 2 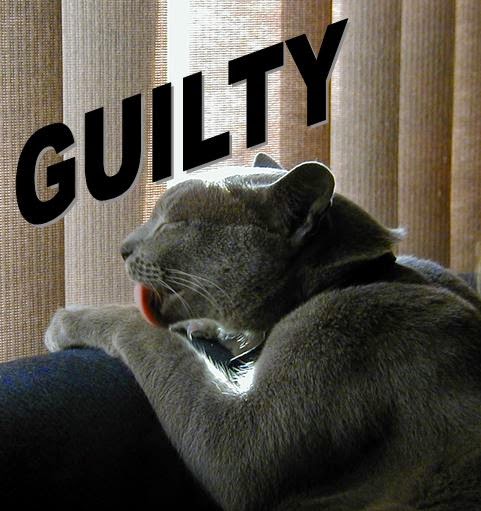 When not sleeping he is often found sniffing shoes in the wardrobe, not because he likes feet but because he intends to pee on them. He also enjoys peeing on doll cloths…or any clothes left on the floor. We have a pre-bed patrol in the evenings to eliminate all attractive options. However he had now lowered his standard to peeing on the kids’ school bags (he has a litter tray and a cat flap and yes he was neutered many years ago, so it’s not as though he needs to seek revenge for all the years of food, shelter and warmth he’s been given). He’s also peed on my bed more than once…I prefer to think of him as senile than evil.

2. Carpet Vomitor
He is also a carpet vomitor. Why throw up on the tiles only one inch away when there is perfectly good carpet? (seriously I cleaned up some today that was literally just on the carpet instead of the tiles…that takes years of practise.) I’m sure that for cats vomiting is all about location, location, location. Bonus points for difficulty including under the bed and behind the sofa. I’m going to give a special mention to Satin, his half-sister (also blue Burmese) because she tried to eat a frog, got half way through and then chucked it up in a revolting frothy green mess however it was outside not inside. So while the ick factor was high the clean-up factor was low.

3. Sofa scratcher
This is actually a team crime between Satin and Sarsen and it has been a long work in progress. A picture is worth one thousand words. They did this after hubby had made them a deluxe scratching post with rope and carpet as well as three platforms. Kids used it more than the cats.

Disclaimer: Despite all of this he is friendly, affection and loves to snuggle up under the doona in winter. He was also very patient when the kids were toddlers and learning how to pick up and handle cats (he did bite each child once, but in his defence he’d meowed, I’d said put him down and they’d decided to squeeze him and run off with him—no blood was spilled and they are all friends now…except when he pees on their school bags).

If you want to find out more about Shona Husk and her writing, check out her website: www.ShonaHusk.Com
Posted by Nicola E. Sheridan at 3:20 AM 2 comments:

Email ThisBlogThis!Share to TwitterShare to FacebookShare to Pinterest
Labels: My cat is an arsehole, Sarsen, Shona Husk

My Cat is an Arsehole - Case File 1

Today I'm starting a series of Case File fun of posts about cats.
Though-out the series you will meet a number of romance Author's Cats, and find out why they're arsehole's too. 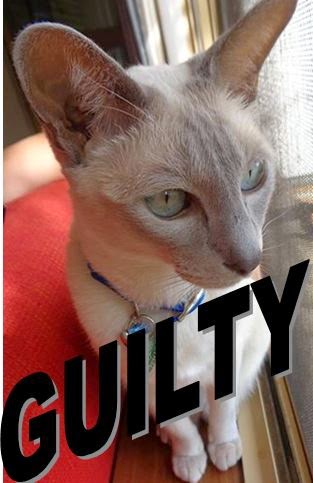 Breed: Lilac Point Siamese
Age: 6 years
Crime/s:
1. Malicious vomiting.
He may look innocent, but this cat is anything but. If you thought 'The Exorcist' vomit scene was bad, you've not met this bad kitty. A thief of the top order, Algae will steal any morsel of food then promptly vomit it up. Malicious vomiting in inappropriate places is this cat's calling card. Vomit on car windscreen? You can safely assume you've been had by this master criminal. Vomit underneath the bed on white carpet? Undoubtedly you've been visited by this cat. Vomit inside the car because you accidently left your window open? Another favourite trick by this master of malice. Found your kitchen sponge mauled beside a puddle of vomit? You've been had by Algae.

2. Fighting under the pretense of playing.
Algae is a skilled ambush fighter. His companion cat, a rescued Himalayan has born the brunt of this particular criminal characteristic.

3. Hogging the TV.
Watching Thunderbirds (OK so this is not a crime, but it should be).


Disclaimer:  I love my cat. I really do. For all his faults, he's an awesome company and also lets me dress him up as Harry Potter - when no one else in my family will - that says something.


AND....  he also gives some of the best hugs a girl could ask for. 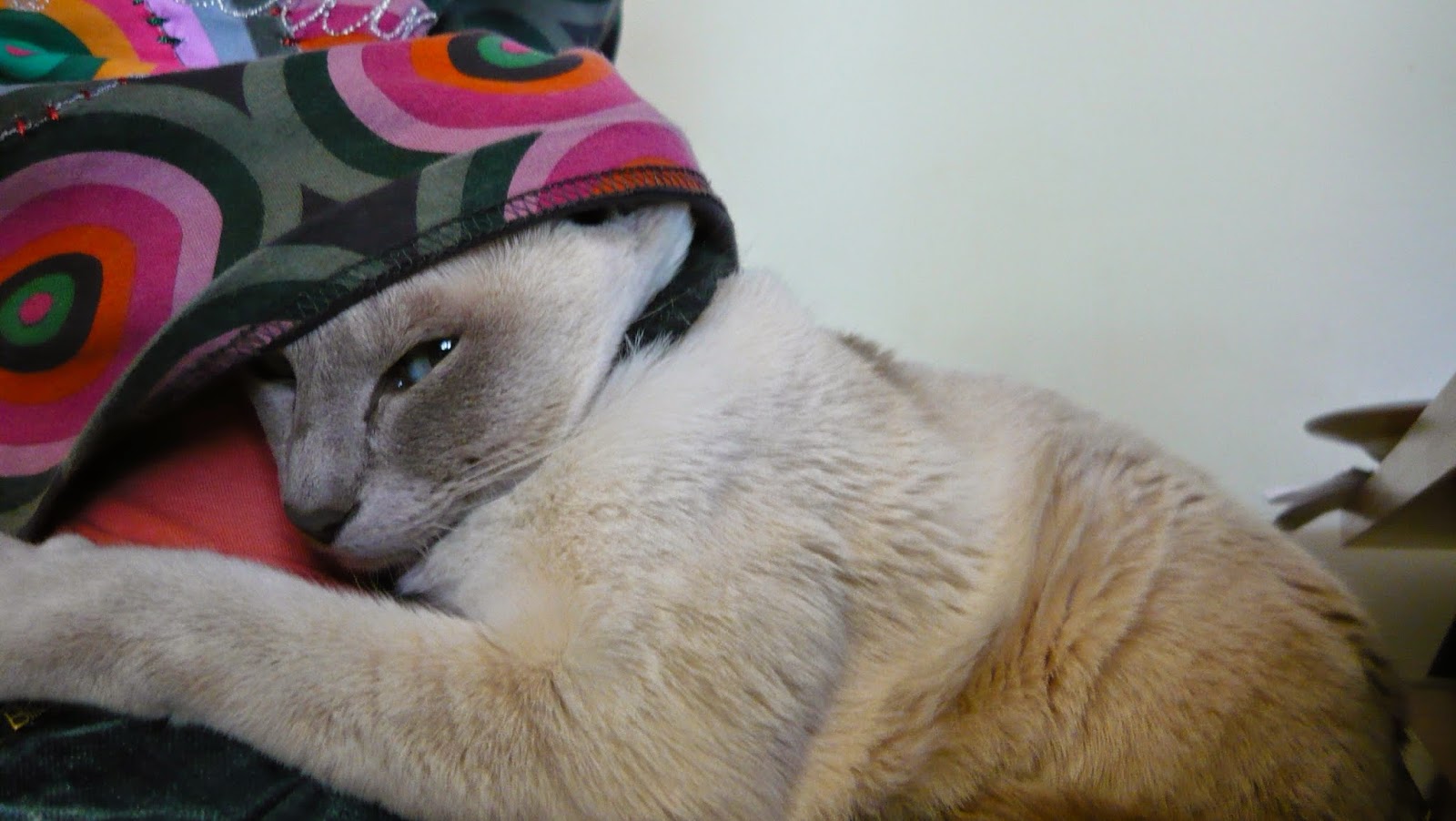