It happens to me often and I like to call it 'man-spiration'.
Manspiration is: when I am inspired to write heroes by seeing or watching some gorgeous guy on telly or searching on the net for models... all in the name of research people!

I love this job!

﻿
*Disclaimer: my husband is my biggest bit of manspiration. LOL.
I am always interested in seeing who inspired (if anyone) my favourite author's heroes... So today I'm telling you about my latest manspiration.
Welcome Ben Mansfield acting as Captain Becker in Primeval (which I am totally enamored with at the moment).﻿﻿

Due to my latest bit of manspiration and his love of guns, I've found my self pondering how I could work guns into one of my WIPs - LOL and I think I've found it. Oh, and if you're wondering which hero Ben Mansfield would be, I think he'd make an ideal Cain, in my WIP "Able as Cain".
Of course, when I write, I don't base my character solely on my manspiration. I use the bits and pieces I find attractive, discard things I find less attractive and make up the rest... I do take the time to study male faces for expression in movies and photos. This helps me to see where creases occur, so I can realistically relate expressions back to my written characters. You'd be surprised how differently some men grimace, how tension is expressed in either a clench of the jaw or a thunderous swoop of the eyebrows... research in the name of manspiration is very useful for this, I recommend it. :D
Gallery of of my other 'manspired' heroes.
Enjoy your week.
Posted by Nicola E. Sheridan at 11:05 PM 7 comments:

The Tarasque
Unless you come from Tarascon in provincial France, are a fan of Warcraft or Dungeons and Dragons, you're probably unlikely to have heard of it.

This is a somewhat sad mythological tale, but one that intrigues me. The Tarasque was predictably perhaps, a beast that roamed Provincial France, laying waste to fields and villages. Described as a strange chimaera type creature, it was said to have six short legs (something like a bears) an ox like body covered by a turtle shell, a scaly tail, topped by a scorpion sting and a leonine head. Which you'll probably agree is fairly bizarre even for a mythological beastie. Everything the Tarasque touched, it burned. 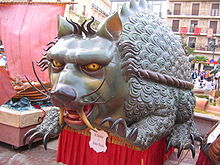 The king of the area had sent several knights to kill the beast, to no avail. Finally, St Martha ventured forth to help the people. She came across the Tarasque in a forest, eating a man. She approached the beast, sang hymns to it, prayed at it and sprinkled it with holy water. The creature then became as docile as a lamb. Using her own girdle (as you do?!) , she lead the beast back to the village.
The villagers were horrified by the beast and brutally slew it - despite it no longer being a threat. St Martha reprimanded the villagers and told them they were wrong to kill the beast. Once they realised their error they were very sorry, and converted to Christianity for forgiveness, and re-named the village Tarascon in memory of the Tarasque.
In mythology there is a reoccuring theme of women calming the beasts of the world. St Martha and the Tarasque, the Unicorn who can only be tamed by a virgin, even King Kong is calmed by a woman. Other more bloodthirsty beasts can only be calmed or sated by sacrificing maidens to them.
The symbolism of virginity and purity in "calming the beast" can be found in almost every culture. It is a theme often played upon in paranormal romance itself.
It is perhaps interesting that in our era of kick-ass heroines that the virgin calming the beast is a theme that dares be repeated. Yet it is, over and over again - but it has evolved with the times. The latest development I've noticed in my readings of paranormal/fantasy romance is of the fiesty virgin. These are women who are virgins by choice, and can still be 'kick-ass' when they need to be. One of my favourite authors, Kresley Cole, frequently has feisty virgin heroines and brutishly male heroes...and I highly recommend them all!

Posted by Nicola E. Sheridan at 3:32 AM No comments:

Email ThisBlogThis!Share to TwitterShare to FacebookShare to Pinterest
Labels: calming the beast, The Tarasque, virgin heroines

Magical Redemption is on its way!

1st NOVEMBER 2012
"Magical Redemption"
Would you trade your soul for love?
"How did a woman as good as you, ever get stuck with a devil like me?"
When Jinx finds herself the Genie of the coldly handsome Lucian, she knows she's in for a rough time.
Lucian is being hunted by the Magical Mafia, otherwise known as the "Family". Years ago, he pledged himself to serve but in a moment of weakness betrayed them. Now, unable to love or live freely, Lucian finds himself falling for Jinx, but knows a future between them is impossible. As they hide from incredible and malevolent magical beings, they search for a way to be together, before fate and the Family separate them for ever...

Dryads...there's more than one kind.

I love trees, I think there is nothing lovelier than a grand old tree standing strong in a storm, or a gorgeous small sapling bursting forth from fertile soil... *sigh*

Therefore I find it completely unsurprising that there are many (and I do mean many) magic myths surrounding trees.


Dryad
Dryads are tree-nymphs from ancient Greek mythology. They are generally carefree female spirits that watch over trees and forests. They protect trees and punish careless humans who may harm their forest. If the dryad lives alongside or (in some cases) inside the tree, then they are referred to as Hamadryads. The Hamadryad's life is so intrinsically linked with its tree that if the tree dies the nymph will die with it. In mythology the Dryad nymphs are often hotly pursued by their lusty counterpart the Satyr.


Moss Folk
I had not heard of these until I began pawing through my new set of mythology books *joy*. The Moss Folk are also known as Moosleute or Holzleute, Eschenfrau in German. Similar creatures also appear in  Scandinavian folklore as Askafroea. They are often considered to be forest dwelling Fae or Fairies. According to myth they sometimes borrow items from people but always repay the favour. In a number of myths they are said to approach human lactating women and ask for their milk in order to feed their young.
In southern Germany in particular they are considered to be tree spirits referred to as 'wood people' and 'moss maidens'. Their descriptions vary. Sometimes described as being small and gorgeous with faerie wings, and at other times depicted as being old, hairy and covered in moss. There is also some link with the moss people and the "Wild hunt", the moss people apparently targeted in this hunt and therefore hide in the trees. Like the Hamadryad, their lives are often entwined closely with a particular tree and if the tree dies, then so does the fairy.

Lunantishee
These are an interesting group of mythological faeries that hail from Irish Folklaw. The Lunantishee are the guardian's of blackthorn bushes, from which traditional Irish walking sticks are made. Apparently the Lunantishee absolutely hate humans for damaging their blackthorn bushes. Legend has it that you are not allowed to cut a blackthorn bush on May 11th or November 11th without some dreadful accident befalling you.


Ghillie Dhu
This is the one I really wanted to look into because in my new mythology books *double joy* there is a truly awesome picture of one. Alas my scanner is not working so I am unable to share that particular image, but I sourced this one from the net to give you an idea. The image I have in my book is of a much more romanticised version, who would potentially make a great hero for a book... if you increased his size...just a tad.

Anyway. A Ghillie Dhu is from Scottish folklore.
They are said to be solitary Fae creatures, around 7 inches tall with long limbs and pale green skin and wild black hair. They wear clothes of moss and leaves and are said to be protective of certain trees particularly Birch. The Ghillie Dhu were considered very shy and docile, living on berries and nuts. However as their natural habitat in the Scottish forests was destroyed for farming/development they became more accustomed to man and began emigrating out to other countries! Some ended up in Canada and France. Some of course, remained in the remnant Scottish forests. It is said that the Ghillie Dhu were very adaptive and the modern Day Toothfairy is actually one of the roles they have adopted in modern day society. If you want to read more check out this link. I think its a very sweet little myth.

There you have it if you're considering writing about Dryad's be aware there are so many more (I've just shown you the tip of the iceburg!) that you might want to consider a lesser known Fae instead.