I will merrily confess that I am avid watcher of Jeremy Wade's "River Monsters". Yes it's melodramatic, sensationalist and filled with some gory re-inactments. However, it is also steeped in mythology.... and I love that. Basically, Jeremy Wade  - biologist and fisherman - travels the world searching for the truth behind some of the world's 'river monsters' and ends up catching some pretty big fish in the process (and don't worry, he always lets them go).
So today, I'm flicking through my mythology book and looking at two mythological river monsters. I've alluded to river/swamp monsters in two of my books, but never actually used one. Maybe I will one day. 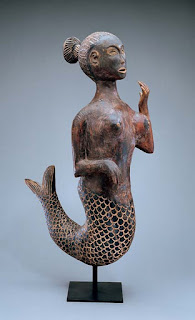 The Miengu - (singular Jengu) is an African water spirit or deity from Camaroon. The Miengu is a beauitufl mermaid-like creature, distinguishable from other 'mer-creatures' by long woolly hair and a gap-toothed smile. They are  found in both rivers and the sea, and are said to be kind. If honored by a person, they will transfer messages between the human and spirit world. TThe Miengu also have the ability to cure illnesses and bless their devotees with good luck, protection from epidemics, good weather and sucess in competitions.
[image sourced from Goddesses&Gods] 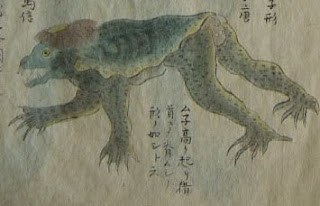 The Kappa is a particularly interesting river monster from Japanese Mythology and  they are sometimes still held responsible for the drowings of children in rivers. The Kappa is described in various ways, most commonly as a child-sized creature with reptilian skin, human like hands.The progeny of a human and Kappa (as you would imagine) is apparently quite repulsive to see.  The Kappa at times can be considered benevolent, and aid people. They are apparently able to speak and understand Japanese but there are legends of Kappa's raping women. It is said that the Japanese Giant Salamander may actually have been the genesis of the Kappa myth.[Image sourced from Wikipedia]
Giant Japanese Salamander! Soooo cool. [Image sourced Jacksword] 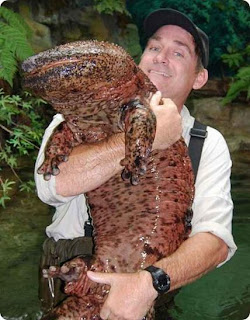 Anyway, I was going to describe a few more, but time has, as usual, escaped me, so I'll leave it here.﻿
I'll be up doing a giveaway on 22nd December on the "DARKSIDE DOWN UNDER" - one e-copy of my latest release,  'Mimosa Black' so be sure to enter!!
I hope all my readers have a super Festive season and stay happy and safe!

Email ThisBlogThis!Share to TwitterShare to FacebookShare to Pinterest
Labels: give away, Mimosa Black, mythology, River Monsters