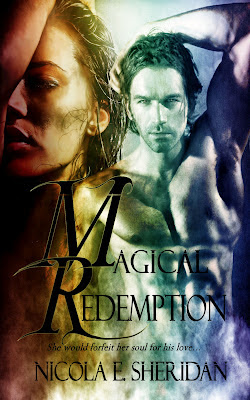 Lucian’s usually cool eyes held a gentle warm light and the lips that so often were twisted in a snarl, curled with the memory of smile.

Her heart flipped and she worried he could hear it.

“Sleep,” Lucian murmured, “Just sleep, we have time to think later.” He bent low towards her and his lips whispered across hers with a touch feather light.
Jinx felt herself sigh with pleasure. Yet, within a moment, whether it was Lucian’s strange demonic powers or the peaceful magic of the swamp, suddenly, she slept.
"Magical Redemption" is due for release on 1st November!

Posted by Nicola E. Sheridan at 6:53 PM No comments: 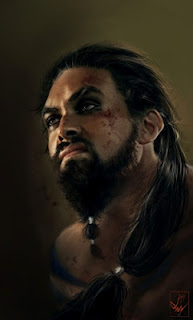 Allow me to introduce Khal Drogo!

Well, I've just watched the complete first series of "Game of Thrones", having not yet read the books.

Firstly, I loved the series. Secondly, I am devastated my favourite characters were killed off.

In the very first episode, we are introduced to Drogo, Khal of the Dothraki, fierce "barbarian" warriors. Despite a SHOCKING  introduction to the character (in the TV series at least), Drogo quickly has become one of my favourite heroes. His romance with his very young, reluctant bride, Daenerys, was one of the loveliest romantic developments I've seen on screen for a long time. Although in the TV series (which is apparently different from the book), the marriage is consumated rather... uh...aggressively, and not particularly nicely. However, despite initial appearances the marriage ends up being a very beautiful one, even if it ends tragically.

It's the combination of brute force and tenderness in Drogo that makes him a really great hero. His tragic end has really crushed my little romantic heart!

Subsequently, Drogo, played by the delectable Jason Momoa, has become my latest 'Manspiration' and fodder for the muse.

Like most Dothraki, Drogo has copper-colored skin, black hair, and black eyes. He is tall and muscular, and moves gracefully. He has a long, drooping mustache and a long braid hung with tiny bells that hangs down to his thighs, symbolizing his status among the Dothraki as an undefeated warlord.
Drogo's favorite horse is a lean red stallion, called simply "the Red," as it is not a Dothraki custom to give individual names to animals. (Reference: Wiki of Ice and Fire)

Jason Momoa's rendition of Drogo on first sight made me wince and think"ugh!". He seemed too big, brutish and wild, but as the the story progressed... well, that all changed and he is now one of my favourite characters of all time. 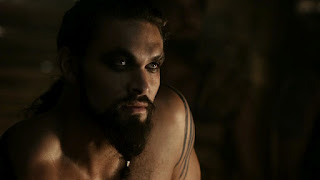 So, if you haven't watched "Game Of Thrones", I recommend it, but be warned the sex scenes are  explicit, the violence is gross and many of the stories are tragic...but Jason Momoa as Khal Drogo is worth it all!