Happy New Year for 2017 - official year of the Odontotyrannus.

It's hard to believe another year has passed and I've haven't had a new release. Oops.
Well I'm currently in the process of re-writes for "Big Girl," here's to hoping 2017 is a more productive writing year!

Anyway onto the subject of January's post... the Odontotyrannus.

This particular beast caught my attention because it is mentioned in Greek classical writings but also  in a story of Alexander the Great. For those of you not familiar, Alexander the Great became king of ancient Macedonia at the age twenty.  Born in 356 BC, Alexander is remarkable in that by the age of thirty had created a large empire spanning from Greece to NW India. He remained undefeated in battle and is considered by many scholars to be one of history's most successful military leaders.  He died aged thirty-two, many suspect he was poisoned, as he had a lingering death after drinking some dodgy wine. Unlucky.

Anyway, it is alleged that the Alexander's Macedonian army was attacked by an Odontotyrannus during a campaign beside either the Ganges or Indus rivers in Northern India.

According to the Latin "Letter from Alexander" (the seventh of such letters about India written to his tutor Aristotle,) the creature had a black, horse-like head, with three horns protruding from its forehead and was larger than an elephant. The creature was fearless, and undeterred by the sight of fire. It is said to have killed twenty-six Macedonians and incapacitated fifty-two. It was eventually killed by being repeated stabbed with hunting spears.  He reports that that the local Indians called the beast "tooth-tyrant"  hence its Greek name dentityrranus or odontatyrannus.

So what may this terrible beast be? Many scholars suggest it may have been a Crocodile living in the river - though the reports of the three horns makes that explanation somewhat problematic. Others suggest it may have been a rhinoceros. This also proves problematic also as the Indian Rhinocerous is famous for being only one horned. Another suggestion is that was an Indus Worm. The Indus Worm is a cryptid beast that looks like an enormous (three metres in length) fruit fly maggot. It is said to live in the mud at the bottom of the river and feed on horses and camels that drink there.  It has terrible teeth on its upper and lower jaw. Again this is unlikely to be the Odontotyrannus, as the dominant features of the beast is that it is black (not white like a maggot) and it has those troublesome three horns.

The Odontotyrannus is interesting in that the original source descriptions are reasonably consistent. Even an Ethiopian version of Alexander describes it as having three 'tusks'.  Personally think the Rhino description is 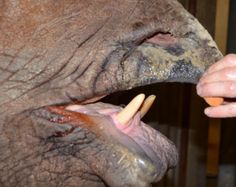 most likely - despite the lack of three horns. Maybe there was a mutant? Who knows? The dark grey / blackish skin colour fits, and the Indian Rhino also defends itself with sharp canines. Regardless, I think the Odontotyrannus is is a fascinating beastie, and one well worth knowing about.

Posted by Nicola E. Sheridan at 8:20 PM No comments: