A Bad Day to be a Sea Monster - Cetus

I am supposing that most of you  are unaware of Cetus -you may recognise the name, but can't think of a mythological creature related to it...

Well Cetus is a massive sea monster hailing from Greek mythology, and the term cetacean (a marine mammal, whale, dolphin, porpoise etc) is derived from it.

Cetus is also a constellation, that can be seen throughout the year.

However the Cetus I'm talking about is the mythological one, not the astronomical one.

Some say Cetus is closely linked to the Leviathan (the biblical sea monster alternately described as a massive black skinned whale or dragon / serpent) - however, Cetus has been described as having the head of a dog or dragon and the bloated body of a whale/dolphin with large broad fan-like fins. 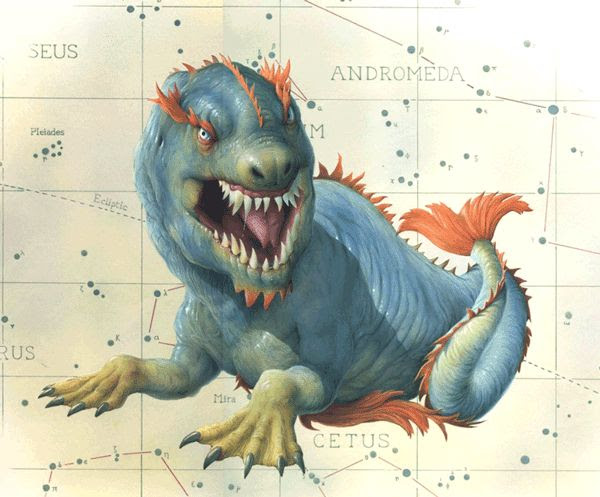 In Greek mythology Cetus has a bad day. One day Cetus was ordered by Poseidon to destroy the Phoenician kingdom ruled by Cassiopeia and her husband. He did this simply because Cassiopeia claimed she was more beautiful than the sea nymphs (Neriads). Which really seems like rather a stupid thing to do as anyone claiming to be more beautiful than a Goddess or demigod seems to meet with an unpleasant end (cough *Psyche* cough).

Anyway, as punishment for her pride and vanity, Cassiopeia has two options, let Cetus destroy her city or sacrifice her daughter Andromeda by chaining her naked to a rock and allowing her to be eaten. Naturally, Cassi chooses the latter.
So, thinking he's in for a nice juicy dinner, Cetus approaches and gets ready for his tea. Unfortunately, Perseus, who just happens to be in the area after chopping off Medusa's head, sees what's going on... He saves Andromeda, and not content with that, cuts off Cetus' head (or some say he displayed the head of  Medusa allegedly turning him to stone). Which rounded up a generally shitty day for poor old Ceets.


Perseus, went on to marry Andromeda, and fight more monsters, of course.
Enjoy your day!
Posted by Nicola E. Sheridan at 7:39 PM No comments:

Secrets are what every story is about, they are the heart of every drama and romance.


I've been listening to the audio book 'The Truth about Lies', a book that delves in what lies actually are, and how people use them. It is totally fascinating, and has enlightened me to come concepts I'd never really considered.

I was brought up in a household in which lying was frowned upon, as I imagine it is in most households. Yet in reading this book about lies, it has become apparent that lies aren't just untruths that people say to make someone feel better (a white lie), or to cover up ones own mistake or crime (an ordinary lie). Lies can also be the things that aren't said. They can be the facts you omit to say, for the sake of someone's feelings or to better your own welfare. This is called lying by omission. 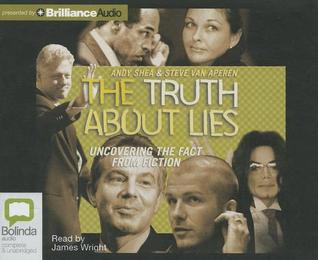 Its these kinds of omissions and secrets that form the basis to many a novel. Think back on the last book you read, was the conflict primarily caused by some kind of lie or secret? It probably was. It may not be a lie or secret by the hero or heroine, but perhaps its the villain or a secondary character that's created a secret and the conflict grows from it.

The Truth about Lies, also delves into the body language of lying - and this is particularly fascinating. We've all be told that the avoidance of eye contact can mean some one is lying, but did you know that a person who has a kinesthetic way of viewing the world may avoid eye contact in a conversation simply because they're listening so hard to what you say that eye contact is irrelevant to them?

Research has shown that even if an individual is a trained and accomplished liar, their body may still give them away. Lying creates stress and fear, which increases pulse rates, causes faces to pale, causes shallower breathing, perspiration and several other unconscious physiological reactions. These are what 'lie detector' / polygraph machines test for. They don't detect lies, they simply detect changes in the person's physiological responses, which may detect the stress of a lie.

What about the body language of a liar? Well, most accomplished liars manage to a    large extent to disguise the external gestures that may suggest a lie, but here are the most common gestures associated with lying that a reader and general observer of people might find interesting.

- Touching the nose. When people lie, there is often the urge to rub or touch the nose. This is because the stress of lying can cause a persons face to pale. After the lie is spoken, the blood returns to the extremity and can cause the nose to itch. I read somewhere that during ex-President Bill Clinton's denial of his affair with Ms Lewinsky - he touched his nose no less than 25 times.

- Squirming. A person telling a lie generally will lean backwards, or move in their seat in a subconscious effort to get away.

- Rigid neck. A person lying may angle their head away, and hold their head stiffly, without much  natural movement. This may be because they are trying to convince you, and flighty quick movements detract from what is being said.

- Lack of facial expression. A liar's face may become as stiff as their neck, with little expression. This is possibly where the term 'a bald faced lie' comes from.

-Covering of the mouth. This is obviously an attempt to mask the lie. It is particularly prevalent in children.

- Shoulder shrug. The individual's shoulders hunch and flex - indicating a sense of helplessness or perhaps an an apology for the lie.

-Foot tapping and twitching.  A reflection of how uncomfortable they are.

- Perspiriation and tugging at clothes. Lying makes people hot, and so often they'll tug at their clothes - or perhaps try and distract themselves or their listener by picking at their clothes.

So there you have a brief study on secrets, lies and deceit, the cornerstone of many good dramas!


Have a great weekend.