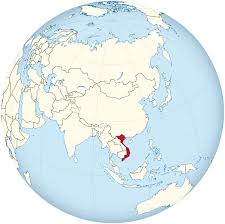 It has been quite frankly amazing. 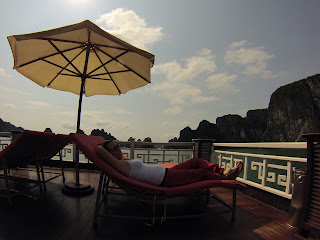 Vietnam has an incredibly rich history, which I will leave to you to read about - but also a richly symbolic culture filled with fascinating mythology.
Vietnam has what our tour guide referred to as "Four Lucky Animals", also know as "Saintly Beasts" these are:
The Dragon - Long 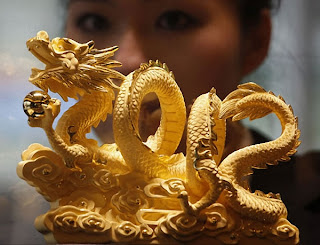 The dragon holds an important place in many world mythologies, no less so than in Vietnam. The stunning Ha Long Bay named after the Dragon, who came down and created  3000 islands that make up the bay, as a way to protect Vietnam from invaders.
Many things in Vietnam are symbolic. The dragon in particular symbolizes nobility and power. The mythological beast is immortal, and can be associated with the elements, air, water, earth, fire.
Like the Chinese style dragon, the Vietnamese dragon is often depicted with deer horns, serpentine neck, eagle-like claws, belly of a crocodile, scales like a fish, and hair.
The Vietnamese creation myth is also centered around the dragon.
Lac Long Quan, the son of a mountain god and a water dragon, was given the land of Lac Viet by his parents. He built two palaces, one in the mountains and one in the ocean. Later he fell in love with a beautiful fairy, Au Co, and transformed himself into a handsome young man to win her over. They married, and a year later, she laid a hundred eggs that hatched into human babies that quickly matured into adults.
Unfortunately, Lac Long Quan remained in his water palace while Au Co lived on land. She became lonely and pined for her homeland, so much so that she took her hundred children to visit it. It became obvious that the couple should separate. They agreed that half the children would go with their father to the land next to the ocean, and the others would follow their mother to the mountains, thus creating the Vietnamese race – the dragon and the fairy’s grandchildren. [http://www.haivenu-vietnam.com/vietnam-culture-myths.htm]
﻿
The Unicorn - Lân 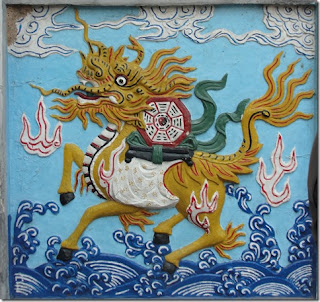 I know what you're thinking - that looks nothing like a unicorn! Just so, the Vietnamese Unicorn, (also known as the Kylan) looks nothing like the Western mythological beast of the same name.
Unsurprisingly the unicorn's appearance can vary and they are often a hybrid-creature comprised of a multitude of other animals.
Description 1: The feet and horn of a deer, the ears of a dog, the forehead of a camel, the eyes of an eagle, the nose of a lion, the mouth of a crocodile, the body of a horse, and the tail of a bull.
Description 2:  a musk deer with huge horns, devil's a tiger's mouth, a catfish's moustache, fishlike fins on its body, and a bull's rail and hooves.
Description 3: The head of a dragon and the body of horse.

In Asia, this creature is believed to be an auspicious animal that bring luck, joy and longevity. It also represents compassion, benevolence righteousness. The Kylan never steps on grass or on insects and never drinks dirty water. 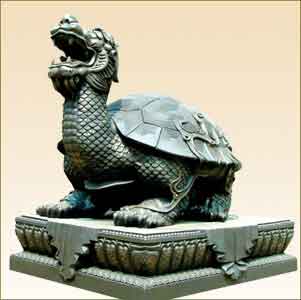 ﻿
The turtle symbolizes freedom and independence to the Vietnamese people, and are said to be good luck. 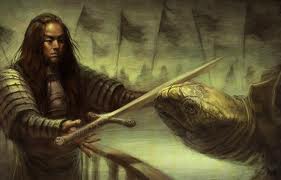 The legend of King Le Loi, who is said to have defeated Chinese invaders with a magic sword given to him by the gods.
After the victory, the king was said to have been in a boat on the lake when a giant golden turtle made its way to the surface and took the sword and plunged back into the depths, keeping the weapon for when Vietnam needed it to fight for its freedom again.
[http://www.independent.co.uk/environment/nature/mission-to-save-the-rare-turtle-of-vietnamese-myth-and-legend-2236215.html]


The lake referred to in this myth is Hoan Kiem, a lake in the old quarter of Hanoi, north Vietnam. True to the myth, inside the lake lives an enormous soft shelled Red River Turtle (Rafetus swinhoei) 2 m in length weighing 200 kg. Some Vietnamese believe this ancient turtle is the one mentioned in the myth.

"The Vietnamese believe the turtle is a guardian of a magical sword, Thuan Thiên, or Will of Heaven," said Dana Healy, a Vietnam expert at University of London's School of African and Oriental Studies. "Hence the name of the lake in the middle of Hanoi, the Lake of Returned Sword, or Hoan Kiem."[http://www.independent.co.uk/environment/nature/mission-to-save-the-rare-turtle-of-vietnamese-myth-and-legend-2236215.html] 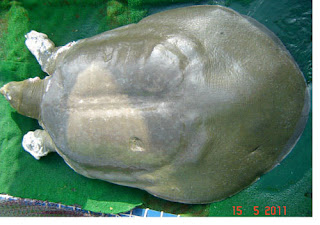 I spent some time walking around Hoan Kiem lake trying to spot Cu Rua (Grandfather Turtle) with no luck. In 2011, the ailing Cu Rua was captured and treated with antiboitics before being released back into the lake. There is apparently only four giant softshelled turtles left in existance (Cu Rua, ﻿two in China, and another in Hanoi). So this marvellous creature is on the brink of extinction. I sincerely hope that Cu Rua lives on, and that the environs around Hoan Kiem are kept toxin and trash free.

Interestingly however, turtle meat is a very popular in Vietnamese cuisine, so despite the auspicious nature of the turtle, a number of Vietnamese turtle species are threatened by hunting. 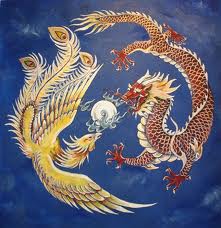 Vietnamese Phoung was often used as an emblem for queens. Richly symbolic it symbolises grace, pride, and nobility.
The Vietnamese Phoung described as an immense bird whose song made up the five basic tones of the traditional music scale. It is also a hybrid animal - a veritable mishmash of animals that may include tortoises and fish. The Phoenix can fly over incredible distances at lightning speed and will only take its rest in super tall trees or mountain tops.
Unlike the Western phoenix myths, the Phoung are truly immortal. They are not reborn from their own ashes.  Like the western phoenix they do however represent longevity, renewal and most importantly hope.


Some others...
Naturally there are many more mythological creatures in Vietnam than just these four... here are a few;

Xương Cuồng - Demon
In Phong Châu (the capital of the legendary Hùng dynasty), there once was a huge old tree. Its branches allegedly cast shade thousands of miles from its root.  When the tree aged and died, its spirit turned malicious  - taking delight in harming people. This spirit or demon is known as Xương Cuồng.

People made a concerted effort to rid the world of this particular demon. The legendary king Kinh Dương battled Xương Cuồng, and  forced the demon to flee. However, since Xương Cuồng was also a shifter, and possessed the power to transform, he hid himself and continued causing havoc. To appease the demon, the people decided that on the last day of each year, one human life was to be sacrificed to calm the demon.

Times change however, and human sacrifice became illegal under the governance of a man named Nhâm Ngao. He forbid the locals from practicing human sacrifice. Unable to appease the demon with human flesh, the demon's behaviour worsened.Xương Cuồng killed Nhâm Ngao soon after.

Finally, under the reign of emperor Đinh Tiên Hoàng, there was a famous shaman named Dũ Văn Mậu. He and his followers disguised themselves and lured the evil spirit away to kill it. [http://www.asiafinest.com/forum/index.php?showtopic=277707]

Hồ tinh (Nine tailed fox)
This is reminiscent of the Japanese Kitsune.

Where modern day Hanoi sits, there once was a fox spirit who inhabited a mountain. It was a shape-shifter and used its intelligence to trick people and lure them to come to it. Once away from other people, the Ho tinh would eat its victim.

Lạc Long Quân together with his army fought and and killed fox. Not satisfied with the creatures destruction he continued and destroyed its den. At this site he dug a pond, called Fox Corpse pond (Thi Hồ Trạch) - which is now West lake (Hồ Tây). He then built a temple to suppress the fox's resentment.

Ngư tinh (Demon Fish)
In the ocean  there once lived a gargantuan marine demon. Described as being at least 150m long with hundreds of legs. This beast devoured fishermen and boats.  It was also a shifter, able to transform into a human to lure unwary fishermen to their grisly deaths.

The hero, Lạc Long Quân decided that this such an abhorrent creature should not live and went in search of it. He found it's lair and as just as the demon was about to devour him, Lạc Long hurled a large hot iron pole into its mouth. It fought against him wildly, but Lạc Long decapitated it and chopped off its tail. The tail turned into Bạch Long Vỹ island. Its head transformed into a dog and ran away. Lạc Long then caught the dog and also killed it which became Mt Cẩu đầu.

﻿
﻿ Of course there are many more fascinating mythological beasties in Vietnamese legend, but I'll leave it here today. Click on the links if you're interested in reading more.
Enjoy your weekend.
﻿
Posted by Nicola E. Sheridan at 3:59 AM