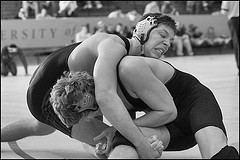 [photo courtesty: Flickr Creative Commons; Available_Light]
Conflict; it's everywhere.
A year ago, I didn't know what the GMC was, I just wrote stories. For those of you who don't know what GMC stands for it's; Goal, Motivation, Conflict - and is the backbone of of many a novelists plot. As I'm something of a panster (so not a plotter), after I've written my story or got the lose idea for a new one, I now like to look over it and see if I actually have a GMC. Do my characters have believable goals set out early in the piece? Or secret ones hidden? What it the motivation behind their behaviour? What conflict is standing in the path to achieving their goal? It's quite amazing really, because even though I don't plot, if I go back and check - quite miraculously there's the GMC snuggled deep within my story.
Anyway, today, I'm concentrating on Conflict - because it's a bit exciting and something that is inescapable in daily life.
Conflict is important in a novel because if makes it interesting, without it, well, you wouldn't really have a story, you'd just have a snapshot of time, with no momentum or movement.


Today, there are a few more modern conflict couplings, such as; Character vs Technology, Character vs Magic, Character against Destiny/Fate - and I'm sure there's more if you thought hard enough about them.

Conflict creates reactions - and thus helps create the story. So how characters react in your story makes them believable and enjoyable to read.

There are two main patterns of reaction when it comes to literary conflict. Firstly; the conflict evokes an immediate emotional response. Hurt, shock, horror, rage even joy, can be some of the initial reactions to a conflict (and it's worthwhile remembering that not all conflict is bad for every character.) The emotional reaction then feeds into a physical action. Or secondly, (depending once again on the type of conflict) the the automatic physical action caused by the conflict has resultant emotional reactions.

I'm sure however, you could mix it up a bit, as we all know a story can take an unexpected tangent when you're writing it, and characters aren't always predictable.

Having said that, being the author (and controlling those wayward characters!) to create a coherent, well considered, pattern of emotional and physical reaction to conflict - is  one of the many things makes a story a good read.

Posted by Nicola E. Sheridan at 6:25 PM No comments: 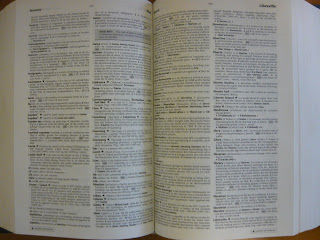 [Image: Collins Concise Dictionary 5th Australian Edition. 2001 pg852]
I am currently deep into editing "Magical Gains", and as the novel is being published on the other side of the world to me, there are are quite a few lexical changes to make!
The lexicon of a language relates to the vocabulary of that language, and as everyone knows there are some some serious differences between Australian English and American English.
For example;
biscuit = cookie
lounge suite = sofa/couch
car boot = car trunk
jumper = sweater
windscreen = windshield
That's just a few I can think of - and I'm not even starting on the spelling differences!
At first, I'll admit, I was kind of surprised at the need to change, because it's not something I'd every really thought much about. I am happy to say however that dialectual differences don't change the story and romance is romance no matter which lexicon you're writing in.
Having said that, it's a good job I didn't write about bogans getting some piss from the bottle-o, watching some footie on the box, then going and getting paro at Blue's barbie. I really feel you'd loose something in the translation there!﻿
Now... back to it :)
Posted by Nicola E. Sheridan at 4:30 PM No comments: 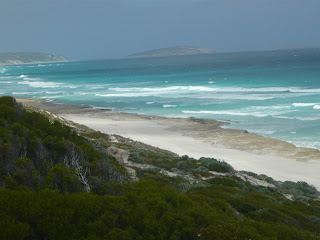 [Esperance coastline Western Australia - by me]﻿
Having just returned from a gorgeous holiday in Esperance, filled with dramatic scenery and white beaches - I've been really thinking about what goes into setting up scenery in novels.

When creating a scene, I tend to focus on things like sight (what you can immediately see), smell, and temperature to give a rounded snapshot of what the place is like. However, there are other things that are equally as important when setting up a scene - things that aren't as physically tangible.

How a place feels to the character is invaluable. Some places are vibrant, pulsing with life, whilst others are creepy and some are old, decrepit and ooze desperation and sorrow (some neglected old Wheatbelt towns really have this feeling).

What causes these feelings is really up to the individuals own imagination. A place that one person thinks is marvellous can be down right hideous to another. I think this difference is due simply down to the individuals imaginative interpretation of what they see. I know for a fact, with my own ridiculously overactive imagination - I tend to experience places more intensely that some others who aren't as imaginative - which isn't always a good thing!!

Before setting a scene however, authors will first have to build the world of the novel. My critique partner forwarded me a very interesting article on world building. The name of the original author eludes me at the moment and if I spend hours digging through my inbox I'm sure I'll find it!  The essence of the article was how to build a believable world. To do this the author needs to show the readers what the people in that world fear, enjoy, misunderstand, forget, bless or bury. It was a very cool article indeed and following those points helps create a believable world with memorable and interesting scenes - well I hope so anyway!
Posted by Nicola E. Sheridan at 5:41 PM No comments:

So I've written a novella about a Harpy - well, quarter Harpy to be exact. It's called "Mimosa Black", and I've recently submitted it to an e-publisher and am awaiting their response. Time will tell!

As anyone one whose read any blog I've written will know - I love Mythological creatures, and I specialise using them in Modern Romance.

I chose the Harpy for one main reason - they're pretty unpleasant. My trusty Collins Concise Dictionary (2001) defines them as "a ravenous creature with a woman's head and trunk and a bird's wings and claws" - this is what I call a "True Harpy".

The joy of using Mythological creatures is that you can adapt them to your needs. For example, the character of Mimosa is a quarter Harpy - a hybrid Harpy if you will. Subsequently she has completely human body with the addition of glossy black wings.

In this novella, I have taken the Harpy and inserted it into our modern society. To do this I asked myself a few questions;

Description: What exactly are my Harpies going to look like?
Society: Where would  Harpies fit as a minority group?
Employment: What kind of employment could they have?
Accommodation: Where would they live?
Romance: Who would love a Harpy?

Description: Well, I tend to go with the standard description of a True Harpy, but a hybrid Harpy (with one parent a human) could really take any of the physical traits and have them mixed.
Society: As a minority group, I think they'd probably be a pretty unpopular but close knit bunch. Aggression and violence would be their main cultural traits. To highlight this fact and create my heroine's back story,  I used the concept of the "Flock" to describe their community and ascribed rules of behaviour to "Flock members".
Employment: I think a Harpy would suit some form of Security work, or Policing .
Accommodation; They'd probably live in high-rise apartments from which they can fly (as siting in a car with large wings would really be quite uncomfortable).
Romance: As for who would love a Harpy - well, I can't give everything away!

Putting magic and mythology back into contemporary romance is something I'm passionate about. The traditional Harpy, (much maligned in tales of old) lends itself to redevelopment in the modern world, creating new and exciting stories to stir the imagination and heart as well.

Postscript: "Mimosa Black" has been accepted by Eternal Press and will be due for release hopefully later this year.
Posted by Nicola E. Sheridan at 3:23 AM 2 comments: