It may surprise to you to know, but there is an amazing array of insects and spiders that appear in mythology throughout the world. As with many of the lesser known myths, these creatures are have significantly faded from the human consciousness in the last century or so. Some such as the pelesit, (which appears in "Magical Redemption") I've already blogged about, but I'm going to introduce you to a few more... 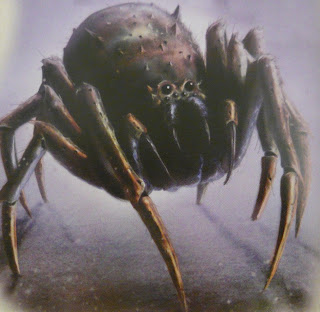 Allow me to firstly introduce the Tsuchigumo. A rather fearsome Japanese shape-shifting demon, who mostly appears in the form of a gigantic hairy spider. The Tsuchigumos are adept at spinning illusions that draw victims into their webs, where they then feast like a vampire on the humans blood. Tsuchigumos can be male or female. There is a story about a legendary warrior named Raiko, who finds himself not once but twiced enmeshed in a Tsuchigumo web... rivetting stuff! These creatures particularly remind me of Agarog, from Harry Potter. 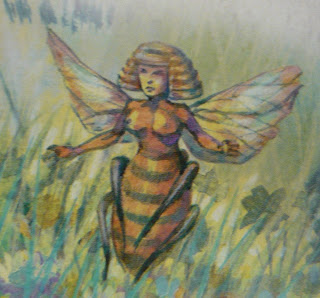 Second insect of the day is the Thriae. Those familar with Greek mythology may have heard of them. Basically, the Thriae are three nymphs, who possess the gift of prophecy. They have been depicted as having the head and upper body of a woman (a common feature I notice in a great number of myths - think the Naga, Harpy, Satyr, Glaistig, centaur etc) but the lower abdomen and legs of a bee. Their heads look as though they have been dusted with pollen... which if they are indeed 1/2 bee seems entirely understandable. The Thriae were the tutors in the art of divination to the God Apollo. They consume mostly (again unsurprisingly) honey. There is some debate as to whether the Thriae were actually human priestesses who acted as oracle/prophets after drinking an intoxicating honey drink... 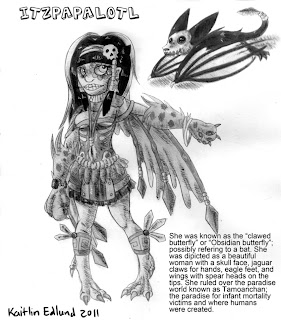 Next,  is a myth some may be familiar with. This is Itzpapalotl, from Aztec mythology. Itzpapalotl is also know as Clawed Butterfly, or Obsidian Butterfly. There is some suggestion that the name did not refer to a butterfly at all, but a bat. Anyway, most descriptions of her are quite similar in that; her body is skeletal, with eagle or jaguar style claws, and the tips of butterfly wings are like razor sharp obsidian. To the Aztecs, Itzpapalotl was the protector of women in labour and midwives. She was also the ruler of a paradise world for babies who die at birth. She is sometimes described as being a powerful star demon. When in her Earthly manifestation, Izpapalotl was the leader of the 'demons of the dark' - the spirits of women who died in childbirth. These demons were believed to hunt at night, seducing men (I think we've found an Aztec Succubus!) and causing illnesses and madness.
﻿
Image courtesy: Kaitlin Edlund﻿﻿﻿﻿﻿﻿ 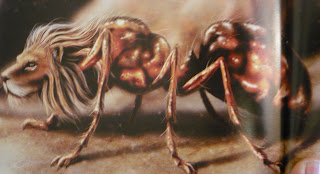 I also feel I really have to mention thee Ant-Lion because it is a seriously random insect mythological beast. Possibly the most ridiculous one I've ever encountered. This beast is is described in early beastiaries (these are collections of animals real and mythical that early biologists compiled). Ant-lion's father is a lion and its mother is an ant...Yep. Really. I told you this one is ridiculous. Anyway, the head and front of the ant-lion resembles the lion (except in miniature) and its rear parts are those of an ant. The early beastiaries talk about the ant-lion perishing soon after birth because its dual nature does not allow it to be an omnivore. Later books discarded this notion, and begin to describe a real insect 'ant-lions', which are a species of neuroptera lava. This lavae buries its body in the sand and feeds on insects that come its way... 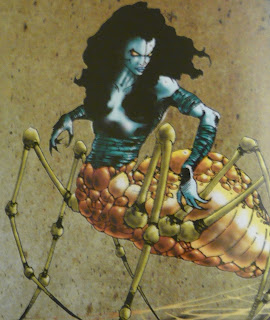 As I'm really running out of time (and should be studying), I'm going to show you one last mythological beast.  It is the Spider woman. I remember seeing one of these in a "Doctor Who" show a few years ago (she was an alien however). In mythology, the Hopi Indians and  allegedly the pre-Columbian natives of Teotihuacan (Mexico) had a Spider Woman deity. According to Hopi legend Spider woman, or Spider Grandmother,  was considered to be creator and weaver of life,the great teacher, protector and Mother of all creation to several  south-western Native American cultures. She manifests as a sacred guardian, overseeing the welfare of all those in need. I personally think its refreshing that a spider creature could be so kindly revered. If I had the time, I'd do some more research on this topic.  Alas the time for blogging further has passed!

[All images unless otherwise stated are courtesy of, B. Rosen's "Mythical Creatures Bible", and F. Cowens "Dragons & Fantasy Beasts"]