Cats, love them or hate them, they have had a profound affect on human society for millenia. I myself have a cat and you may recall him, from my series of case file posts "My cat is an Arsehole".

Whatever your personal thoughts on the feline persuasion, it cannot be denied that their lives have been inextricably linked to humanity. Archaeological findings  suggest that early humans in the Upper Paleolithic Period, (35,000 to 8300 BC), were some of the first humans to leave evidence of feline "worship" with the discovery lion-headed figurines. In fact one of the oldest known animal-shaped sculpture is a lion-headed, human-bodied figurine known as "Löwenmensch". This figuring was found in Hohlenstein Stadel cave, Germany, carved from mammoth ivory and dates to approximately 32,000 BC. Of course, this may not represent worship, but rather art, or fantasy. No one will ever know. Regardless, what is interesting is that they chose to model they human hybrid creature with a feline head in the first place.

Thus from that time on, felines, whether it be the domestic cat, sabre tooth cat, lion, leopard or other, have appeared repeatedly in human myth and legend.

Allow me to tell you about a few...

You are all likely to be familiar with the sphynx, griffin, and chimera's that hail from Egyptian and Greek mythologies, and if you're not then shame on you.

I'm going to enlighten you to some of the more lesser popular Cat mythologies.

Shishi 獅子
If you take yourself to Japan and visit a Shinto or Buddhist temple you are likely to come face to face with a Shishi and Koma-inu, also known as temple lions. In pairs, they become shrine and temple guardians who possess magical powers to repel evil.
Interestingly enough, the differences between the shishi and koma-inu (Korean lion-dog) are becoming increasingly subtle.

In Buddhism the lion was believed to have a spiritual power and eat bad sprits. This belief still remains in Japan as Shishi-mai (獅子舞). During the New Year, a red faced shishi comes to the neighbourhood and while it dances, the lion tries to eat a child's head. Don't be alarmed, as all the lion wants to do is not eat the child, but rather the bad spirits which might be hiding in it. Nice.. Additionally, the shishi's curly hair hold power itself. The koma-inu's hair meanwhile is more wavy the curly. When guarding places, one creature  usually has its mouth open while the other’s is shut. It’s no coincidence, but rather Buddhist symbolism. It is also important to note that Koma inu is sometime referred to as a Fu / Foo Dog.

Naturally, not all cat like creatures in mythology are good. In fact, there are quite a number who are frankly horrid.

There seems to be a  widespread belief in many cultures that a cat will suck the life (or breath via smothering)from of a newborn baby - and many of these cat tales are similar in that the creature attacks human babies and has vampiric tendancies. Below is an excerpt from a previous post I did.
The Vampire Cat of Nabeshima This is one of the few myths in which the vampire cat does not target infants. This legend speaks of a shapeshifting cat (again something very common throughout world mythology). The the shapeshifting vampire cat was created when a cat crept into a young woman's bedroom and mauled her neck (presumably to drink her blood), then dragged her into the garden and buried her. The cat then assumed the woman's form. It just so happened that this particular lady was the object of a young princes affections. Though she was his favourite, he failed to notice an change in her after the cat shift. However, a change became noticeable in the Prince. From that day on he became increasingly pale and sickly. No one seemed to know what was wrong with him, as no one realised that the vampire-cat-woman was visiting him at night. The prince continued to deteriorate.  As a result, the prince was put under heavy guard, alas, every night his guards would become sleepy at precicely ten o'clock, and would fall asleep. It was then that soldier named Ito Soda came and asked if he may be able to watch over the prince. He was adviced to be careful of the sleepiness that would over come him at ten o'clock. Ito Soda was prepared, when he began to feel sleepy, he stuck a knife in his thigh and would twist it every time he felt sleepy. Thus, he remained awake (and in considerable agony one suspects). At midnight he saw the girl creep into the prince's room. As she approached she asked Ito Soda why he was awake. The vampire-cat-woman then left, unable to take her sustenance from the Prince. That morning, the prince woke up feeling much better. The same thing happened on the second night, and on the third the girl didn't come at all - and all the soldiers were able to stay awake. By this time, the prince and Ito Soda were convinced the prince's lady love was the culprit. So Ito Soda went to confont her. Terrified at her discovery the woman fought him and escaped into the mountains where she continued her vampiric behaviour. After some time the prince sent out hunt to kill her. She was found in the mountains and slaughtered. (Bruce, 2009, pp100) The Bajang The Bajang is a Malaysian type of vampire cat. It is also a shifter, able to take the form of a fox, pole cat or feral cat, as well as a small stocky and unnattractive person. The bajang's true form is that of a stunted, stocky human with a blunt nose, wispy hair, and pale brown skin. It has beady orange eyes and a wide, lipless mouth, which is permanently creased in an evil sneer. Its hands are bony claws, and its feet resemble the talons of a vulture. The bajang can alter self at will into the form of a small wildcat. The creature is most often encountered in this form and disturbs the household by mewing like a great cat. As a wildcat, it has light brown fur and retains its distinctive orange. REF Like many south-east Asian mythological beasties, the bajang consumes human fetuses, and also likes human milk. According to Monstropedia Bajang can be captured and guarded in a bamboo tube. A specific type of leaves will be used as a cork of the tube and locked with a talisman. Bajang will be fed with eggs an milk. Bajang can be used as a familiar (like the Pelesit) and reared in intention to harm an enemy, causing disease, madness or death.  .REF
On a facinating but disturbing side note, Lilith (who hails from Hebrew folklaw) fled from Adam (as she didn't want to obey him) she turned into a giant black cat, who also liked to feast on the blood newborn infants. What a way to demonise disobediant women! Phwaw.

Anyway, I am running out of time, but I hope you've enjoyed this little visit into some of the weird and wonderful myths about cats.

Have a super weekend.

Garuda and the magic of Hindu mythology

So I've just had a very short, but beautiful sojourn to Bali. 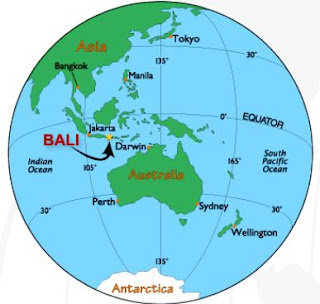 As I walked about the humid, crowded streets of Kuta, some thing struck me. No, it wasn't the phenomenal number of Australian tourists sporting shiny fresh tattoos, nor was it the multiple calls to plait my hair or give me a massage. It was the fabulous, elaborate statues of Hindu Gods and mythological creatures. They are everywhere, and they are amazing.

Bali is a Hindu state in the Muslim country of Indonesia - and the story of the Bali Hindu Dharma is as fascinating as everything else is in this tropical paradise. In short, Balinese Hinduism as a monotheistic form of Hinduism. It incorporates animism (the religious believe that things inanimate and animate contain a spiritual essense) and ancestor worship and you can see evidence of their beliefs everywhere in the form of little canang offerings (small woven palm leaf tray filled with offerings of incense, betel nut leaf, lime, gambier leaf/flowers and may also contain other things like cigarettes, biscuits, etc).These offerings are to praise the Supreme Indonesian Hindu God Sang Hyang Widhi Wasa, or as a thanks giving for peace.

In addition to the offerings, you will see demonic monster-like statues everywhere. They may be standing guard next to the toll booth, or at a little roadside shrine, outside a shopping centre, or lining someone's driveway. These demons are referred to as Butas or Kalas, and like many creatures of mythology can be good or bad depending on the mood. You will often find a canang sari offerings at their feet, and you may also notice that sometimes a wrapping of cloth has been draped around their waists to preserve their modesty.

However it wasn't the Butas and Kalas that really took my interest on this trip, it was the enormous depictions of Garuda. Garuda is a bird-like creature from Hindu beliefs. Traditionally depicted with the torso and arms of a man, Garuda has the wings, head, beak and talons of an eagle or vulture. His body is gold in colour, wings are red, and his face is white. He is often referred to as the King of the Birds, and is used by the Hindu God Vishnu (Wisnu in Indonesia) to fly around. Garuda is the enemy of all snakes (which symbolise death and the underworld). Symbolically, Garuda represents birth and heaven and has associations with sun and fire. 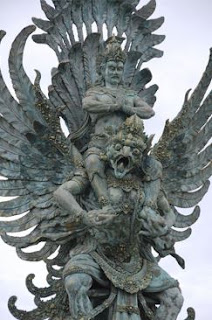 If you are fortunate enough to fly into Denpasar, and look out the window you will see an enormous statue of Wisnu and Garuda being built, once completed it will be the largest statue in the world, some thirty metres taller than the Statue of Liberty.

I Just love how the depictions of Garuda are so fierce, often the statues have teeth in his beak. I also love how alive and vivid the faith is in this country. It really does make it a very magical place to visit.

Have a great week.

If my book was a chocolate bar...

If my book, A Warlord’s Lady, was a food product I’d urge you to buy it…


With No Added Nonsense


A guilt free treat, guaranteed not to land on your hips!


**Excess consumption may cause severe distraction and daydreaming. Motor vehicles should not be operated within two hours of reading.


No confusing names with apostrophes and hyphens


No sex behind closed doors


No miserable endings
You can by it at all good Online e-book retailers!