Hippogriff or Griffin... what's the difference?

What is the difference?

Well, put plainly it's their bums.


This is a Griffin.

Features: Head, wings, and forelimbs of an eagle, with the rear end of a lion.
Origin: Greco Roman, Persian, Egyptian.
The Griffin is one of those interesting mythological creatures who appears around the world in similar guises. Considered to be the king of all creatures, the Griffin of legend tends to be a guardian creature.
Interesting points: Considered to be an incredibly loyal animal, the Griffin mated for life (which makes the Hippogriff myth even more suspect). If a Griffin's partner died, they would never mate again. They are also an heraldic beast, this means they were often used as a symbol in crests / flags to represent boldness and bravery.

Flavius Philostratus mentions the griffin in The Life of Apollonius of Tyana:

“These animals do exist in India” he said, “and are held in veneration as being sacred to the Sun ; and the Indian artists, when they represent the Sun, yoke four of them abreast to draw the images ; and in size and strength they resemble lions, but having this advantage over them that they have wings, they will attack them, and they get the better of elephants and of dragons. But they have no great power of flying, not more than have birds of short flight; for they are not winged as is proper with birds, but the palms of their feet are webbed with red membranes, such that they are able to revolve them, and make a flight and fight in the air; and the tiger alone is beyond their powers of attack, because in swiftness it rivals the winds." [ref]

I'd love to know what creature this guy really was describing!

Now, this is a Hippogriff, as portrayed in "Harry Potter and the Prisoner of Azkaban" 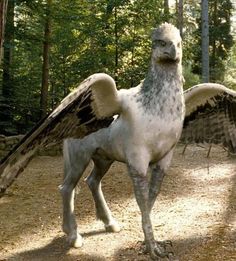 Features: Wings, head and forelegs of an eagle, and the rear quarters of a horse.
Origin: Greco Roman.
Hippos - meaning horse, griff - referring to the griffin. They allegedly the offspring of a griffin and a horse. They are considered to be a symbol of the God Apollo, and their image was used by Emperor Augustus (23 September 63 BC – 19 August 14 AD) to decorate Apollo's temple (Apollo Palatine) in Rome.
Interesting points: There does not appear to be any myths surrounding the hippogriff. It seems to be a creature of pure symbolism. Though symbolism of what, I can't definitively state. Considering the previous mythology of the eternal fidelity between griffin mates, I am surprised the hippogriff symbolism ever arose in the first place. Some scholars suggest that its use in the Apollo Palatine, is a subtle reference to Egypt (though how they can explain that, I am not sure). Other sources suggest that the hippogriff is a symbol of love, because ordinarily griffins and horses hate one another, and have mated to produce the hippogriff - well, some spicy fireworks must have happened there.

OTHER CREATURES PEOPLE CONFUSE WITH GRIFFINS and HIPPOGRIFFS 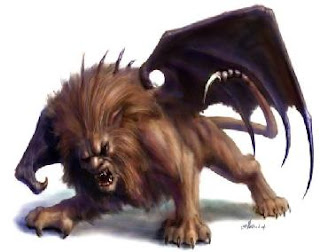 Features: Face of a man, body of lion, tail of a scorpion, sometimes depicted with wings. 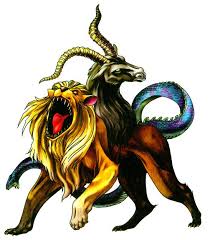 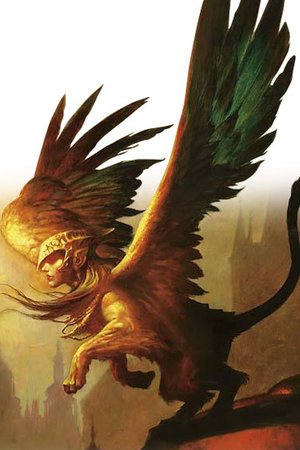 Features: Head of a woman, wings of an eagle, body of lion.

Features: Head of a man, body of bull, wings of an eagle.

Minoan Genius
Features: head of a lion (sometimes a hippo or donkey), tail of a crocodile, sometimes depicted with female human breasts. (read this interesting article here). Though seriously if you're getting a Minoan Genius confused with any other mythological creature... frankly kudos to you for even knowing about it.

And that dear readers is quite enough for today. Happy reading!
Posted by Nicola E. Sheridan at 1:40 AM