I'm not going to over-share, but I had an experience with Tight Pants the other day, and rest assured those jeans will not be seeing daylight anytime soon.  However, the uncomfortable day got me thinking about the huge number of (particularly paranormal) romance heroes that wear some very tight pants. 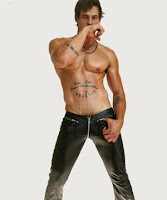 I'm sure most of you are aware of a condition called "Tight Pants Syndrome" aka TPS. This is when a man in particular becomes plagued with 'trouble down under' due to wearing excessively tight pants. 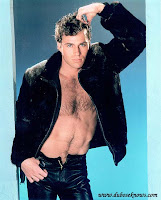 The term was originally coined in a 1993 article by Dr. Octavio Bessa, an internist in Stamford, Conneticut. Bessa described a collection of gastrointestinal symptoms including abdominal pain, heartburn and reflux a few hours after meals that he would see in 20 to 25 men every year. The common thread: All wore ill-fitting pants with waistbands several inches smaller than their bellies, Bessa reported in the Archives of Internal Medicine.

Nice.
Those nut-hugging leathers on your hero aren't looking quite so sexy now are they? 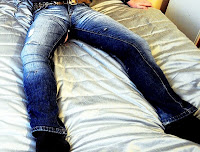 According to the report, 50 percent of men suffering from TPS experienced groin discomfort and over 25 percent suffered bladder problems. The report also stated that 1 in 5 men experienced a twisted testicle.  A disturblingly high statistic!

Now, considering that most romantic heroes are rather well endowed, the fact that they strut, run and otherwise do fantastic things in tight leather and denim is beginning to feel a little unrealistic to me. 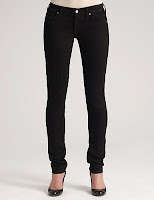 You will also be unsurprised to discover that TPS similarly afflicts women, without going into the seriously nitty gritty, TPS can cause a whole host of gynaecological problems in women as well. So if your heroine is a fiesty one, clad in tight leather -  just consider how long has she been wearing those pants? I don't think I need to say more.

In conclusion; I am not saying that our heroes and heroines shouldn't ever wear tight pants. They are a very useful device in showing the reader your hero's obvious endowment, or his pert backside. They're also practical for the kick-ass heroine who simply couldn't fight Zombies wearing floral callots.

However, it's worth remembering that realism in writing helps build worlds and engages audiences. Perhaps considering the tightness of your characters pants may, in some small way, improve the readability and believability of your tale.


Have a super Sunday!

I just made two new book trailers for my novels, Magical Redemption and Magical Gains.

As you can see from watching them, I had a bit of fun. I'm not at all sure they're worth the effort, but still whilst I'm being naughty and not studying and being even naughtier and not writing, I decided I should do something to improve publicity for this series.

This is the "Magical Redemption" Trailer

And this is the "Magical Gains" which is a little quirkier perhaps than Redemption's.


Anyway, I'm curious, do trailers affect your choice of book? Do you seek them out to watch?
I confess that I do not choose to view book trailers, except if I am totally in love with a series and gagging for the next release. Due to my own attitude towards watching trailers, I am sceptical of their usefulness for the lesser known author.

Still, they're fun to make!

The Drekavac - a mix of myth and religion...

So many myths stem and grow from religious belief or custom and the Drekavac is a particularly interesting evolution of this. 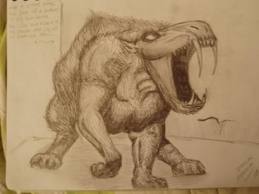 (I have decided to start all my Mythological Beasts posts with a Beastly Facts list, let me know if you think any quick fact should be added.)

The Drekavac hails from slavic mythology, the word literally meaning "the screamer" or "yeller" (Serbo-Croatian).

Described as being a terrible beast with muscular kangaroo-like back legs, and the head and body of a dog - the drekavac is said to arise from the soul of a dead unbaptised child -  a very common theme throughout slavic/eastern European mythology.
The notion that if an individual dies unbaptised, the soul will return and wreak havoc on Earth is one of those enduring fears that thoughout the ages, has has packed many Church pews.

The drekavac allegedly appears most often near a cemetary , sometimes in the form of a creepy looking/ malnourished child, begging to be baptised. It gets its name from the awful screams and cries it emits.
The drekavac can harm people. Some legends claim the scream itself is an omen of death (like the Banshee) and if the beast's shadow falls upon an individual then that person will die.

The creature inhabits tunnels and caves and is reported to eat sheep and cattle. The bodies of mutilated sheep and cattle are often produced as alleged evidence of the drekavac's existance.

It is interesting that the drekavac has recently moved beyond myth into cryptozoology and as it does, so the link with the soul of the unbaptised child diminishes.There are numerous images over the internet of "drekavac kills" (ie disembowelled sheep, mutilated cows etc). Similarly with it's hunched kangaroo-like legs and fiersome teeth -  the modern descriptions of the drekavac hold a remarkable similarity with the chupacabra (goat sucker of South American myth).
﻿
However, there is one significant difference between the cryptid status of the chupacabra and drekavac. The drekavac has an historical religious origin and was born through mythology, whereas the chupacabra is a modern cryptid currently evolving its own mythology.

Everything exists for a reason. Looking at the religious meaning behind myths and the beasts within them, gives insight into the reason for the creatures alleged 'existance'. The drekavac is essentially a cautionary tale; "baptize your children, lest their souls turn into this hideous beast when they die." Upon hearing this, what God-fearing slavic peasant would have decided not to baptise their child? In simply understanding this, I understand more about the creature. Combine this with a bit of imagination and you've nearly got a ready-made paranormal tale bursting to be told...

Knowing what the creature exists to do in both the mythological sense and the underlying social sense allows a writer develop a creature/character that is not only true to the myth, but also to the culture of origin.
And on that poignant note, enjoy your day.﻿
﻿
Posted by Nicola E. Sheridan at 9:41 PM No comments: 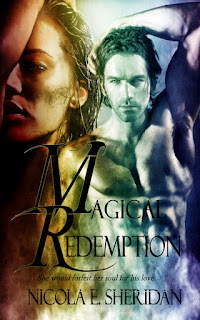 Better late than never, I always say, so after a week's delay Magical Redemption will be on sale Wednesday 7th November!
On Wednesday, an excerpt of Magical Redemption will also be available to read over at the Darkside Down Under, so be sure to check it out.
In the mean time, here is an excerpt to whet your appetite.. and guess what? The Satyrs are back!
“What do we have here?” a snide voice asked from behind. “You will not find a hospital around here that caters to...his kind.”
There was the clip-clop of cloven hooves behind her. Jinx felt her skin crawl as she turned to face the speaker. Words stuck in her throat. She gazed up the heavy, auburn pelted legs and lingered for just the briefest of moments on the large, exposed genitals hanging between them.
A real, live satyr― just what she needed. She looked upward and jutted her chin. Her defiant gaze was met by curious, auburn eyes and a sharp, angular face. Curling horns erupted from a mane of hair.
“Do you like what you see?” The satyr smiled, showing perfectly-white, blunt teeth.
“No,” Jinx snapped. Using her magic, she rearranged Lucian’s dead weight.
The satyr tilted his head to get sight of Lucian’s face, and his shrewd eyes widened. “What are you doing with Lucian?” he hissed, moving forward with remarkable speed and raising Lucian’s head to examine him. The satyr was suddenly too close. He smelled like fresh hay, and his body thrummed with an unsettling energy.
“You know Lucian?” Jinx whispered. She knew with uncomfortable certainty that this satyr was the reason her magic brought them here.
“Of course I do,” the satyr snapped, his expression now concerned. “What’s wrong with him?” His amber eyes caught and held hers. Although she was fairly confident the satyr was here to help, she didn’t want to divulge everything too soon. She squirmed under his gaze.
“I can’t tell you anything until I know who you are and what you know about Lucian.” Jinx steeled her spine and jutted her jaw, again.
The auburn-haired satyr raised an artful eyebrow. “My, aren’t you a feisty one? I do like my women feisty.” He grinned and sunk into a low bow. “I am Silenus, the stag satyr of the Kuching Free Zone.”
“I’m not your woman,” Jinx said, hating the fact that her gaze was convulsively drawn to Silenus’s naked crotch. “Ugh,” she grumbled to herself.
Silenus continued unabated. “Lucian is my friend–though, I will confess I have not seen him for many years. Time, clearly, has not been kind to him.” He narrowed his auburn eyes at her speculatively.
“You say that like it’s my fault,” she snapped.
“Is it not?” His eyebrows floated high, again.
“No,” Jinx cried.
Silenus smiled at her outrage. “Allow me to assist you,” he said and stretched out his tanned arms to relieve Jinx of Lucian’s burden.
“No. Don’t touch him.” She jerked Lucian away. His head wobbled grossly as more blood pattered from his face. Dire as the situation was, she couldn’t risk Lucian to an unknown being, supposed friend or not. “I need to test your intent first.”
Silenus’s eyebrows hit his curly hairline. “Test my intent?” A smile tugged on his lips suggestively. “I don’t think my intent needs testing. I make a habit of being perfectly transparent.” He grabbed his crotch and cupped his genitals, proffering them to Jinx.
“Christ,” she gasped and looked away.