Giants... in more than just one way.

Forgive me dear reader for the lack of blogs of late, I currently have three WIP's in progress which have succeeded in swallowing all of my free time.

One of my latest WIP's is tentatively titled 'Big Girl', and as one may well guess from the subject of this post, that the heroine is indeed a Giant.

I will not go into significant details today, but am going to give you a brief overview on Giant Mythology throughout the world.

Definition: A humanoid being of immense size.

Giants are present in nearly all of the world's mythologies - and notably tend to play a significant role in creation myths. We are all all familiar with the myths that mountains are made by the slumbering / defeated bodies of mythical giants, or legends of wars between giants and gods. So today I'm going to show you a list (it is not comprehensive) of some of the different  giants found in in mythologies around the world.

There is however, quite an exhaustive list on Wikipedia (which you should always take with a grain of salt, in my opinion the Kapre (from Philippines mythology is not a giant))  http://en.wikipedia.org/wiki/List_of_giants_in_mythology_and_folklore

There is also an interesting book The Book of Giants  Jewish book which expands on a narrative from the Hebrew Bible. It discusses at length the Nephilim (the offspring of fallen Angels) and their habits on earth.

Celtic & British mythology
Balor - He was a giant who lead the Fomorians (ancient race of giants/monsters) in ancient Ireland.
He had a single eye which destroyed any who looked upon him.
Gogmagog -Lead a race of giants who lived in prehistoric Britain.

Greek
Atlas - Atlas was one of the Titans who was defeated by Zeus. He was responsible for holding up the Earth. He was also attached to a female Titaness, Phoebe who governed the moon.
Cyclops - gigantic one eyed humanoids. The most famous of which is Polyphemus, the cyclops who was blinded by Odysseus.

Norse
Frost Giants - lead by Ymir, are central to Norse creation myths. It is said that Ymir's skull became the sky, his flesh - earth, and his blood formed seas and lakes. His teeth and bones became the mountains.

Basque
Jentilak - were a race of Giants who lived in Pyrenees Mountains. It is said that the standing stones found in these areas were caused by the giants tossing rocks from one mountain to another.

Asia
Pan-Gu - hailed from Chinese mythology, a peculiar looking giant with horns on his head, who dressed in furs. Pan Gu is an intrinsic figure in the Chinese creation mythology. It is alleged that with a swin of his ax, Pan Gu separated Yin and Yang of the 'cosmic egg' thereby creating the earth and sky.

Purusha - A Hindi creation giant who unlike standard giants allegedly had 1000 heads and 1000 feet. When Purusha was killed, and ultimately dismembered his mind became the moon, his eyes became the sun and breath, the wind.

Daityas - These are enormous evil spirits who it is said were at war with the gods during the first
years of Earths existance. Ultimately the Daityas were defeated by an army led by Goddess Indra - and were imprisoned deep within the ocean.

South America
Zipacna - hailing from Mayan mythology was a particularly large and evil Giant who was very boastful. He claimed to have created the mountains.


North America
Paul Bunyan - a recent creation for an advertising campaign, Paul Bunyan was a wood cutter of massive proportions.
Si- Te- Cah - according to Paiute legend, these were a tribe of red haired cannibalistic giants.


You will notice that the mythologies containing giants are one of two types;
1. Creationist myths
2. Monster myth

The creationist mythologies were created to enable people to learn how their world was created in simple and culturally understandable terms. Often when you look at mountains, you can see humanoid shapes within them. So it shouldn't be too much of a surprise that people believed the earth to be created by a human figure, albeit one significantly larger than themselves.
I discovered a similar example of this when I was in Borneo twelve years ago. We stayed nearby Mount Santubong. This mountain looked similar to sleeping form of a woman. Legend has it that two princesses were fighting over a prince, Princess Santubong was struck on the cheek by the other princess, and this ended the quarrel. However the Gods were angry and turned them into the mountains. The scar on Santubong's cheek still visible in her mountain form. 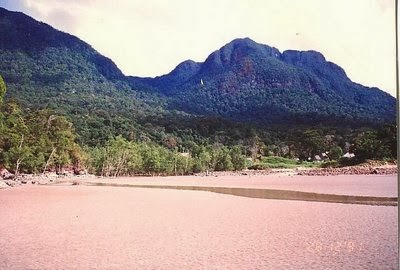 The monsterous, demonic style of myth is also quite understandable. What could be more horrible that a human that is not quite a human because that wants to eat you? They were used as cautionary tales to ensure co-operation and moderate behaviour within tribes.

Suffice to say, I think giants get a pretty hard rap in mythology, which is one of the many reasons I've long wanted to incorporate one into a book - and I'm pleased to say that particular 'work in progress' is moving along well.


On that note, enjoy your week.
Posted by Nicola E. Sheridan at 9:28 PM No comments: