Long time no write peeps, my apologies. Life has a way of getting in the way of writing and blogging.

However, that doesn't stop me from discovering some new weird and wonderful mythological beasties.

The Nuppeppo, is largely harmless, appearing as a blob of flesh with just a hint of a face in its smelly folds of fat. Though entirely blobular; arms, legs and hands may be sighted. Some believe that it is created from the flesh of the dead, which accounts for its vile odour.
The term nupperi is also used to unflatteringly describe a woman who wears too much makeup. Don't be that girl.

It is also said that those who can stomach the stench, and eat the flesh of a Nuppeppo  may well be granted eternal youth. Who knows, Nuppeppo flesh might just be the next thing in anti-aging - stranger things have happened.

The Nuppeppo has a charming habit of wandering aimlessly around villages or cities at night, usually in winter, around the graveyards, shrines and temples.  It is usually a solitary creature though there have been alleged group sightings. As I said earlier it is pretty much harmless (aside from the bad smell) although sightings may cause general alarm and anxiety to the witness. 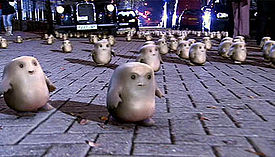 When I first read about this, I was reminded of the Doctor Who creature the Adipose that  came from people's fat.

As for what the Nuppeppo could actually be in real life I don't know. The fact it appears mostly in winter, suggests it could be an iizuna, or Japanese weasel, with a white coat, that people have mistaken at a distance. I'm not sure. As to why such a creature was created in folk law, I feel that's pretty self explanatory. Japan has an extremely high rate of eating disorders and gluttony is fairly frowned upon (particularly in women), so fat per se, is quite an undesireable thing.

Mythological creatures usually serve a purpose. What would make you stop wandering around along in winter? Vampires, werewolves, aufhockers, ghouls, or perhaps a mobile blob of stinking fat, that might give you an evil look. You decide.

Have a fabulous week.
Posted by Nicola E. Sheridan at 4:14 AM 1 comment: