Well in my never-ending quest for interesting and bizarre mythological creatures to fit into my novels, my research took me to the myths of Germany, and what treasures I have found! 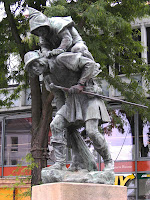 The first beast worthy of mention is the rather rude sounding Aufhocker... Not a name I'd try and pronounce around small children or members of the clergy...
The word Aufhocker literally means to 'lean upon'. It is a creature that  is said to jump on the back or shoulders of lone wanderers at night, its attack instilling such horror in their victims that they collapse in fright. Although some myths state that the individual collapses not from fright but because once the Aufhocker attaches to a victim it grows dramatically in size/weight.

You can see in the picture of the Aufhocker statue in Hildesheim (Germany) that the artist of the sculpture has depicted the Aufhocker as a human in shape. However  the actual form and nature of this mythological creature is quite unclear. Interestingly, many stories apparently describe the Aufhocker as a shapeshifter, who may appear in the guise of a dog or a sad old lady (personally the sad old lady guise would be the scariest). However, the link with the dog shape-shifter is interesting because in Belgium there is a  hell hound called the Kludde, whose modus operandi is remarkably similar to the Aufhocker, in that it stalks lonely roads at night, and jumps on the back of travellers ripping their throats out.

However, there are other descriptions of the Aufhocker as a type of zombie (corporal undead), or kobold (type of Germanic imp) or as some type of vampire or werewolf.
According to Wikipedia the Aufhocker is "considered to be a very dangerous theriomorph that tears the throats out of humans. The connection to attacking victims in the throat is what links the aufhocker to vampirism."
(A theriomorph is: a creature (usually a deity) capable of taking the form of an animal)

According to myth, the aufhocker can not be killed. However, as the Aufhocker seems to have been blended with vampirism, lycanthropy and hell-hound mythology thoughout the ages, it is said that they can be driven off by prayer, churchbells, dawn or (this is my favourite) profuse swearing.

The next beast is the Nachtkrapp or Night Raven, is a mythological creature inspired to strike fear into children.
Several versions of the Nachtkrapp exist. In most legends, the Nachtkrapp is described a giant, nocturnal raven-like bird.
The most popular (and hideous) of the legends claim that the Nachtkrapp leaves its hiding place at night to hunt. If it is seen by little children, it will abduct them. The giant bird then flies to its nest whereby it grossly devours the child by first ripping off their limbs and then picking out their heart.
There are of course, other legends, in which the Nachtkrap will merely abduct children by placing them in his bag (how he holds this bag I do not yet know) and take them 'away'.
There is also the Wütender Nachtkrapp (German, lit. Angry Night Raven).  Despite its name, this appears to be a tamer version of the Nachtkrapp; instead of abducting children, it simply crows loudly and flutters its wings, until the children have been terrorized into silence (I personally don't see this as being very effective....)
Then, there is the Guter Nachtkrapp (German, lit. Good Night Raven) is a benevolent version of the Nachtkrapp. This bird enters the children's room and gently sings them to sleep. Clearly the inventer of this myth had never actually listened to the not-so relaxing song of a raven.

The other fascinating beast I discovered in my research is the Nachzehrer - a German Vampire-like creature. This creature however, does not drink living blood, but consumes the dead.
As you may have noted, the Germanic mythologies have much in common with many of the other Slavic and European myths with small differences.

The Nachtzehrer literally translated as "night waster" (also referenced as nachzehrer.)  Is a myth from the Northern region of Germany. The Nachtzehrer is an undead creature easily recognisable by its rather strange habit of holding the thumb of one hand in the other and walking about with only its left eye open.


This creature was believed to have the ability to kill family members through some type of long-range magic. The Nachtzehrer awakens whilst still in the grave. Whilst still entombed, it would begin to eat its own shroud and then feed on its own flesh. As it does this, a member of its family (in the land of the living) would begin to waste away, and the Nachtzehrer gets stronger. 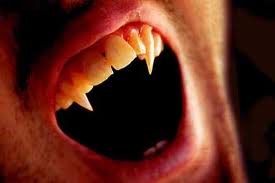 The myth continues to say that at times the Nachtzehrer will rise from it’s grave and feed on the bodies of other corpses. They also are said to find mates in the corpses of  women who have died in childbirth. Apparently, it is possible to track a Nachtzehrer by the the sucking sound it makes (similar to that of a breastfeeding baby).

To become a Nachtzehrer, the individual does not need to be bitten. It is more a case of unusual death circumstances, or epidemic deaths. Additionally, if a child was born with part of the amniotic sac on their head (particularly if it was red), than they were believed to become a Nachtzehrer on death (a little unfortunate for them!). So, to prevent this, the amniotic sac would be dried and preserved, and later fed to the child and this would reverse the curse.
Other preventive measures according to Darkness Embraced (a Vampire mythology site) were: Placing a chunk of earth under the chin of the deceased, placing a coin or stone in their mouths, tying a handkerchief tightly about the neck, placing nets or stockings inside the grave (vampires in northern Germany were said to be compulsive untiers of knots), or being buried face down to avoid its potentially dangerous gaze. Some extreme preventative measures would be to decapitate the head of the deceased, drive a spike in it’s mouth to fasten the head to the ground, or fixed the tongue so it couldn’t move (WTF?) It is important to remember in the past, belief in the arcane was strong, and as life was hard for many, the desire to go to heaven was strong. So any measure that may prevent the dead from rising was regarded as legitimate and at times necessary to ensure that individual finally got their eternal peace.


The very last creature I'm mentioning today is of more a inter-European mythological beast and is is truly bizarre. It is called the Chichevache  also known as the anchevache or thingut is a mythical female monster, believed to have survived by eating good and virtuous women...
Legends describe Chichevache as a thin cow-faced creature. It was said to be poorly nourished because virtuous women were rare! (Dear me!) Chichevache however, also had a male counterpart, the bicorn (also spelt bicorne or bycorne), which was supposed to have eaten good, kind, loyal and obedient men. The bicorn was well built and healthy, supposedly due to the abundance of good men to feed upon. (Hmmm...you've got to love the misogynistic tendencies of times past...not.)


Anyway, I have spent waaaaay too long on this, and have much work to do, I'm inspired, and ready to write. Hope you found this little sojourn into Germanic myth as fascinating as I did. Have a great weekend!