Welcome to 2013!
For our first blog of the year, I'm talking about Filipino Mytholgical Monsters!
The Philippines
Officially known as the Republic of the Philippines (Filipino: Republika ng Pilipinas), is a sovereign state in Southeast Asia in the western Pacific Ocean. 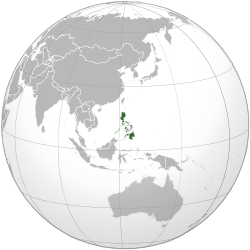 The Philipines is a country made up of islands which are divided into 17 regions creating a total of 80 provinces.  It's population is approximately 80% Roman Catholic, and this combined with pre-colonial animist beliefs makes the Philippines a rich and interesting source of mythical creatures to research.
Kapre
BEASTLY FACTS
Name: KAPRE
Origin: Philippine Mythology
Creep Factor: 5/10
Religious affiliation: Christian/Catholic
Deadly rating: Low
Cryptid: No
Shares similarity with: Giant, Trickster, moss folk, tree spirit
The Kapre is a tree demon.
It appears in the form of a hairy bearded humanoid creature ranging from 7-10 ft (2-3m) in height.
The Kapre is a smoker, and smokes a pipe or a long cigar. They dwell in large trees wearing only loincloths and a magical belt which renders them invisible to the human eye.
Like many nature spirits, the Kapre is fond of tricks and may confuse travellers so they become lost.
Indications of the presence of a Kapre are; scent of tobacco/smoke coming from tree top, rustling branches despite no wind, loud laughter and disembodied voices in the jungle as well as an abundance of fireflies. 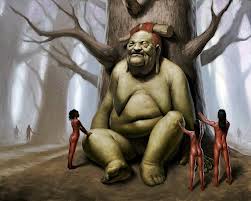 The Kapre shares a similarity with the Batibat, another tree dwelling 'demon' who takes the form of a obese woman.
If the Batibat's tree is chopped down to build a house, it will hide in a post hole and attack people during the night by sitting on their chests and suffocating them (this is very similar to the methods used by the traditional incubus/succubus demons in European mythology, however there does not seem to be sexual link with this one).
Sigbin

Name: SIGBIN
Origin: Philippine Mythology
Creep Factor: 8/10
Religious affiliation: Christian/Catholic
Deadly rating: High
Cryptid: No
Shares similarity with: vampire, chupacabra
The Sigbin is a random looking mythological creature that apparently resembles a goat with no horns (a sheep perhaps?) However, it also has large ears that it can clap together as a human would its hands. It walks in a peculiar fashion, backwards with it's head between its long hind legs...It also has a hideous smell, and a tail it can use as whip (these are all similar characteristics of the Chupacabra - and interestingly a number of the images I googled for the Sigbin where of the same deceased animals other people have called the chupacabra)
The Sigbin's modus operandi is to creep from its lair and tear out human heart (preferably those of children), though some myths say it drinks blood. It is particularly dangerous during Easter Week.
There is some discussion suggesting  sightings of the the Sigbin may actually be related to a rare cat-fox creature similar to the one  that was discovered in Borneo in 2003.
Tiyanak
BEASTLY FACTS

The Tiyanak is a horrible demon creature that takes the form of a newborn baby crying in the jungle to attract a victim. This method is used by a number of other mythical baddies through out the world and the similarities between the Tiyanak, Toyol and Drekavac are quite striking (see my blogs about the Drekavac and google the Toyol (be warned it's hideous))
When the victim comes across the 'child', they naturally pick it up to sooth and protect it. Alas, Tiyanak then reverts to it's natural demonic form and attacks the individual with sharp claws and fangs.

The most common description of the aswang is of a witch-like woman with leathery wings and bloody fangs. She may also appear as a dog, bat or snake. 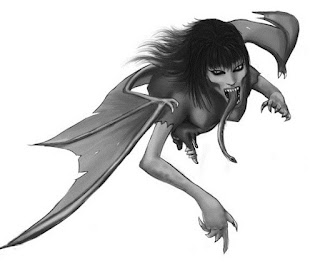 The Aswang is a grave robber, consuming the corpse and replacing it with a tree trunk carved with likeness of the dead person. They also (as is most evil mythological creatures) like to eat children, particularly targetting their liver or heart.
Some believe that the Aswang may live amongst the human population, preferring to work as butchers or sausage makers (naturally!).
The Manananggal however, takes the appearance of a more western style vampire. However, it has the unique ability to separate itself from its legs and fly off to hunt, whilst leaving its lower abdomen and legs at home. If you sprinkle the lower half of the Manananggal with salt you will kill it. It also has a proboscis like tongue and particularly favours pregnant women in its diet...
So there you have it, some interesting and strangely familiar mythological beasties to whet your appetite for the paranormal.
Enjoy your Week and Happy New Year!﻿