The Tokoloshe - cute name, not so cute beastie.


In celebrating the release of my latest novel "The Magician's Keeper", I am indulging in one of my favourite past-times - researching mythological creatures, in the hope that I may find time to incorporate it into my latest work in progress.

Today's creature is the Tikoloshe, also known as the Tokoloshe. This creature hails from Zulu South African mythology.

There are (as always) conflicting descriptions of the creature depending on who is describing it. So I'm going to go the most common one.

The Tokoloshe is said to be a small hairy hominid. This creature closely resembles the European Brownie, a small, often mischievious creature commonly connected with a household. They can torment people, break things and otherwise be a nuisance. It is said that they can even become murderous. People who believe in the tokoloshe often raise their beds on bricks so that the creatures can clamber around on the floor at night without bumping their heads on the bed, which makes them angry and likely to cause a problem.


The Tokoloshe has a unique feature, that being a single buttock. I'm not quite getting the mechanics of that single buttock, but hey, whatever, this is mythology after all. The Tokoloshe also speaks with a lisp and is generally invisible to adults. To maintain its invisibility it holds a pebble in its mouth. It can, however choose to be visible to whomever it wants.

There are a few news articles from South Africa about the Tokoloshe, which, to be frank are quite fascinating if not a bit rude and bizarre.

One article is an interview with a man from Johannesburg who has a female Tokoloshe visit him in the bathroom while he bathes. This man has grown very fond of his attractive yellow-bone Tikoloshe so much so he wishes he could "take her to the mall to show her off." Incidentally he is also having an intimate relationship with the mythological creature.  What is even more fascinating about this
article is not only that it was only written last year, but the comments following the story. They range from asking what kind of drugs the interviewee is on, to condemning him, stating that being in a relationship with tokoloshe will prevent him from ever having a real human girlfriend.
If you want to read the article it's here: Daily Sun, Yellowbone Tokoloshe in my bath.
If you want to read more articles like this (some are more explicit) just google "Tokoloshe news", and you'll find them. 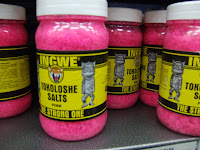 There is however, a darker side to the tokoloshe. They can also be the familiars of bad people. If you feed a tokoloshe it may be indebted to you hence it will do your bidding.  If you are wickedly inclined, you may use that debt to ask the tokoloshe to bother and torment people. However, there is however a way to prevent a tokoloshe bothering you, and that is by using salt. You can also use traditional charms and spells known as muthi given to you by a sangoma to try and rid yourself of trouble some tokoloshe.


In an article from 2013, it is said that special Tokoloshe salt was for sale in an entrepreneurial supermarket in Hazyview Mpumalanga, to control Tokoloshe problems.

So there you have it, a mythological beastie that still has significant resonance in modern society. I don't really know what to make of it, but it certainly makes for an interesting read.


Have a marvellous week.