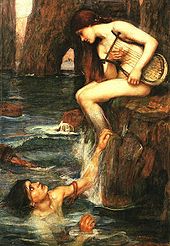 [Image courtesy Wikipedia, ﻿The Siren, by John William Waterhouse (circa 1900)]
Traditionally the Siren is from Greek mythology, though over time, they have adapted to become part of many European and Asiatic myths.
The thing most consistently described about Siren's is not their looks, but their voices. The Siren's call is alluring, and can lead a man (specifically a sailor) to his his death.

Descriptively their appearance varies dramatically. Most commonly, Sirens combine the bodies of women and birds in various ways. In early Greek culture, Sirens appeared as birds with large women's heads, bird feathers and scaly feet. Later, they were represented as female figures with the legs of birds, with or without wings, (which is the description I have chosen to use in "Magical Gains").
In Byzantine culture, they are described as having the head and torso of a sparrow but the abdomen, rude-bits and legs of a woman (the mind boggles!). Alternatively they could be small bird body with a woman's head.
In more recent history, however, the Sirens seem to have been depicted as anything from mermaids and fish-shapeshifters to gorgeous women, whose bodies as well as voices are desirable (see image).

In "Magical Gains", I have used one Siren, Leucosia. Leucosia's name is derived from Greek Mythology. According to Greek myth, there were originally three Sirens, Peisione, Aglaope, Thelxiepeia, or, Parthenope, Ligeia and Leucosia. I chose the name Leucosia simply because I liked it best.

In "Magical Gains", all creatures that exist in myth and legend are real. So there are many more than just three Siren's in the world of "Magical Gains". I chose to describe Leucosia as mostly humanoid in form. As her voice is incredibly beautiful, I decided to make her incredibly ugly. Her skin looks like weathered leather, eyes like pearl globes, and hands that end in claw like fingers. I have deliberately chosen not to reveal whether she has the legs of a bird and so, she wears long flowing black dresses to cover herself. There are reasons for this is, firstly, I did not want her confused with the Harpies (who also make a glittering appearance in the novel) and secondly, the fact she hides part of herself, reflects back on her ambitions and personality.

As I have said before, one of the many joys of using mythological creatures in literature is that they are open to interpretation. There are no hard and fast rules that you must stick by. Leucosia happens to be one of my favourite characters (but lets face it I have so many favourites it's hard to choose). The blend of beauty in voice, ugliness in face and ambiguity of character, makes Leucosia difficult for the other characters to understand or predict - and it's that unpredictability that epitomises the Siren.

If you're wanting to read more about Leucosia - you've only got 13 days until "Magical Gains" is released as an e-book!  You'll have to wait a few more weeks before you can get your hands on a paper-back though, as they become available some time after the initial release.

Of Selkies and Weres - Shona Husk

Of Selkies and Weres...

I am a big fan of using unusual mythological creatures in writing, and thankfully so is fellow author Shona Husk!
Welcome Shona - my first ever guest blogger here at Magical Gains!
Shona is a writer of paranormal romance and her latest title Kissing Phoenix, was released a few weeks ago. Shona's other titles include: An Elemental Tail, How to Breathe Fire, and Boyfriend in a Bottle - and many more to come.

I love the idea of shape-shifting. The idea of being able to experience the world though another set of eyes, to have senses beyond the average human, opens up a whole realm of possibilities for a writer.

In Kissing Phoenix I knew how Lilith would be saved but when I started writing I wasn’t sure what type Were she would become. I wanted to give her choices, but at the same time I wanted to go beyond the wolf, the snake or even the big cat (not because I don’t like these animals but because they weren’t right for the story).

Since the story takes place in England I wanted something local. Local shape-shifting myths from Ireland and Scotland are about Selkies. Often living in isolated fishing villages they kept to themselves. They are said to change form by taking off their fur, and if one captures the fur the Selkie will not leave.

A further bit of research revealed that there are several other water based shape-shifter including dolphins from South America, sharks and crocodiles. Stretching the Selkie myth to turn them in to Weres seemed plausible, and fun. It was something different and something local to the story.
In the world I build for Kissing Phoenix Vampirism is genetic (so Vampires can’t turn people) and Wereism is a virus.

So if you could be turned into a Were what animal would you choose?
Posted by Nicola E. Sheridan at 3:30 PM 2 comments:

Chatting over at Darkside Down under today!

Check out my interview with the Darksiders!
Darkside Down Under

Posted by Nicola E. Sheridan at 4:36 PM No comments:

Where's a Baku when you need one? 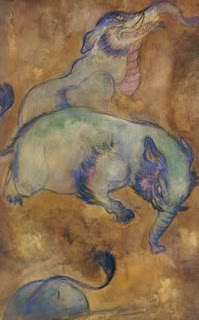 [photo courtesy; http://img.photobucket.com/albums/v683/Nymeth/DreamEaters.jpg]
I really love mythological creatures - particularly those obscure ones that seem to be disappearing from our collective imaginations. Over the next few weeks in the run up to "Magical Gains" release, I'm going to post about random mythological creatures that you may find in some of my writings. My own personal crusade to stop them falling into oblivion!
Today, I've chosen the Baku - which features in my second novel, "Magical Creations" (working title; not yet submitted). Now, the Baku is obscure in  the western culture, but seems to still be thriving in it's native one.﻿
The Baku is of Chinese and Japanese origin and is other wise known as a "Dream Eater" spirit  (﻿獏 or 貘).
Description; It's difficult to get one consistent description of a Baku. Descriptions range from; an elephantine head with the body of a lion (most common description) or a lion's head, horses body, cow's tail and legs and feet of a tiger. Sometimes they are merely described as a tapir with stripes, or just a pig like animal. Not all that much is said about a Baku's physical mode of movement. They are sometimes depicted as bi-ped, but most commonly as a quadraped.
The Baku in "Magical Creations, has the elephantine head, with a lion like body, with very dark tiger-like stripes. She is also a bi-ped. I decided to use this simply because of her role in the novel. Having her move as a quadraped didn't fit with her situation. Allowing her to be bipedal also makes her easier to relate to - although her gait is very ungainly and awkward. In fact, one of the characters comments that she looks like a cruel and unusual science experiment. Which let's face it - she does!
Behaviour; Generally speaking, the Baku is a benevolent creature - who aids people suffering from bad dreams. The Baku is said to come and eat peoples bad dreams, leaving the sleeper in a peaceful slumber. To this end, in Japan, some parents still place images of a Baku in children's rooms to ward off bad dreams and reassure children.
As with all mythological creatures, there is usually a flip side, in the case of the Baku, they are occasionally described as making themselves a nuisance. They can do this by waking people, or taking away beneficial dreams - depriving the sleeper of both good dreams and restful slumber.
When I use mythological creatures, I tend to  use those characteristics that aid my story, and help the mythological being mesh better in the "world". My Baku, is a Counsellor, or therapist. Being a benevolent, caring sort of creature, I thought this would be a likely choice of career. The Baku can only communicate through thoughts. This enables her to read other peoples minds and help them through difficult problems. She also has the ability to connect people via the astral plain, and promote good dreams.
﻿
Anyway, here's to the Baku, guarding our dreams and giving peaceful sleep!
Posted by Nicola E. Sheridan at 9:18 PM No comments:

The Countdown is on... 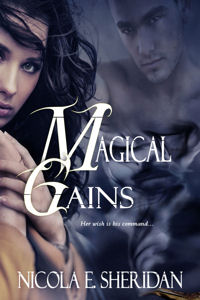 So, pending editing, "Magical Gains" is due for release next month. The time has flown and I am excited and nervous about its release!

On the 12th of Feb, the "darklight" will be on me at Darkside Down Under

On the 26th Feb, I will be stopping by Heather Kuehl's Examiner blog

On the 7th March - Magical Gains will be released! Whoo hoo!
Posted by Nicola E. Sheridan at 8:39 PM No comments: