Ugly Heroes... ever read one and suddenly found him HOT?!

We're all fairly familiar with the ugly/plain heroine aren't we?

We've got Bridget Jones (slightly chubby, socially awkward), Ugly Betty (dorky hair and braces), and  Mary Balogh's "One of the Slightly" series also has an ugly heroine. In fact, my latest Heroine Jinx (in Magical Redemption) is definitely not conventionally attractive...

However! What I'm interested in today is the unconventional looking hero. I am absolutely taken with the TV series Primeval, it's been around for a while, but we've only recently discovered it. I'm into series three, and they have replaced one of the main characters Nick Cutter (Douglass Henshall) with Danny Quinn (Jason Flemyng). Admittedly initially I didn't find the character of Nick Cutter at all attractive (physically or personality wise). Yet I grew to like him. Now he has been killed off, and the directors have introduced Danny Quinn, and most people will agree he isn't your conventionally attractive actor.

So I'm interested to see if my opinion of him changes throughout the series. Can his personality win me over, and will he grow on me? (hopefully in a good way and not like a fungus).

In all my novels, my heroes are what I would call universally attractive. Their appearance, personality and body type fit with the general concensus of what makes someone attractive. (Having said that, a friend infomed me the other day that she didn't find Lucian particularly attractive *gasp*)
Anyway, my question is this, have you ever read a character who you initially found revolting, but then grew on you?

I read a book some time ago, in which this was the case. For the life of me I can't remember which book it was. Which is a shame. I remember being completely revolted by the hero but by the end couldn't put it down and thought he was was Adonis, (just without the good looks).

So what makes ugly to you?

Here's my ugly list. These are the three points that I think really affect my judgement on what physically attractive is. You'll notice my 'ugly list'  doesn't contain things like; weight, facial symmetry, missing limbs etc, because I think characters can still be appealing in the romantic sense with them. The points on my ugly list are pretty much all rectifiable - and thus, having these traits is less attractive, because you don't need to have them.

1. Diseased and damaged skin - this is fairly undestandable, I think healthy skin is fairly symbolic in our culture of good health and generally our heroes are healthy inorder to be heroic.

3. Lank greasy hair - I think this reflects the heroes ability to care for themselves as well as care for others. If their hair/body is disgustingly unkempt and particularly dirty, then they clearly are unable to look after themselves, and therefore how can they rescue/look after/ help the heroine?

Do you think you could grow to like a hero  had had halitosis and rotten broken teeth? (I'm talking about 'like' in the romantic heroic sense not about 'like' because he's a "nice guy despite his unfortunate acne" kind of way).

I would love to know if you've read of a male character (with at least one of the ugly points) and you still managed to find him attractive in the romance stakes.

Anyway, have a great week.

Yep it's up. My 'interview' with Lugh. 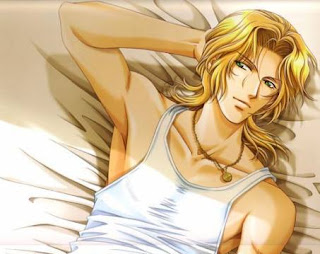 For all of you unaware Lugh is a sub character who makes an appearance in "Magical Gains" "Magical Creations" and "Magical Redemption" - (Hopefully coming soon!)

Here's the link, I'm also giving away an e-copy to someone who follows me on FB or Twitter .

http://www.identitydiscovery.net/2012/03/magical-creations-interview-with-lugh.html
Posted by Nicola E. Sheridan at 5:39 PM No comments:

Underwater Panthers, the Alkonost and the Nandi Bear... 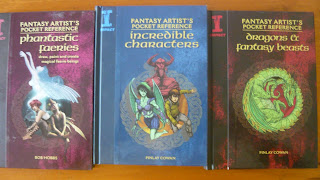 I'm very lucky I have family that indulge my nerdiness. My sister sent me a great birthday present recently, a three book series of Fantasy Artist's Pocket References. By Finlay Cowan. All images in this post are from the books.
Anyway. These books are so cool. Not only do they have some awesome creatures, (some of which, *gasp* not even I had heard of...) they show you how to draw them! If only I had more time on my hands at the moment, I'd be sketching away like a crazy woman!
A couple of them particularly caught my eye as unfamiliar, and I'd like to share them with you. The first is the Nandi bear. This one is a cryptid, rather than a mythological creature (see my blog post on the Chupacabra here if you don't know the difference between a cryptid & mythological beastie). The Nandi bear is said to inhabit a region in Kenya unsurprisingly inhabited by the Nandi tribe. Also known as the Kerit, this creature has the same kind of 'elusive nature' as the Abominable Snowman. It's believed to have a loping gait like a bear crossed with a hyena, but can also stand on two legs. It is known to attack people and there are many alleged 'sightings'. Current theories on it's origin suggest it may be a type of unknown hyena, or bear (although bears are not indigenous to the Nandi area), or perhaps some ancient, rare giant baboon.
I think it is a particularly cool cryptid anyway.

Secondly, the next creature from these books to catch my eye, and one that was completely unfamiliar to me - was the Underwater Panther, sometimes called Mishibizhiw. This creature originates from Native American mythology particularly the  Odawa, Ojibwe, and Potawatomi nations around the Great Lakes area of the US and Canada.
Underwater Panthers are considered to be water monsters, and have various descriptions and personality traits depending on the legend. The beast can take a variety of forms... the body of a wild feline (lynx or mountain lion), the horns of a deer or bison with upright scales on its back and occasionally feathers. They usually have extremely long tails, and hiss or roar. They are said to live in the darkest, deepest parts of lakes or rivers and can cause storms.
Personality varies, sometimes benevolent and sometimes malevolent - to possess a hair from it would bestow great power.

Thirdly there is  the Alkonost, who is a rather lovely birdlike mythological woman.
The Alkonost is, according to Russian folklore, a creature with the body of a bird but the head of a beautiful woman. She makes sounds that are amazingly beautiful, and those who hear these sounds forget everything they know and want nothing more ever again - which you'll agree is very smiliar to the Sirens of Greek mythology.  The Alkonost however, is generally benevolent towards humans. However, when lays her eggs on a beach she then rolls them into the sea and upon hatching a thunderstorm will ensue. The thunderstorms are so fierce that the ocean will become so rough no one can sail that day.
The name of the alkonost comes from the Greek demigoddess, Alcyone. In Greek mythology, Alcyone was transformed by the gods into a kingfisher.

Don't you just just love how mythological creatures are transformed from culture to culture? I do.

Anyway, if you are looking for a particularly interesting set of books about mythology with the added bonus of drawing thrown in -  two of my favourite subjects!) I thoroughly recommend these books for inspiration! Rest assured I'll be pawing over them for years to come.

Here are the links;


Have a wonderful weekend.

Posted by Nicola E. Sheridan at 2:29 AM No comments:

Jörmungandr - more than your average sea-serpent!

May I introduce Jörmungandr, from Norse Mythology. Anyone who is at all familiar with Norse Mythology will know that Jörmungandr (also known as Midgarðsormr in Old Norse) is one of the three children of the god Loki and a giantess Angrboða.   Quite frankly if I were in Loki's position, I'd be asking for some serious paternity testing... as from the varying appearances of Loki and Angrboða's children, you've seriously got to wonder what she got up to in her spare time... 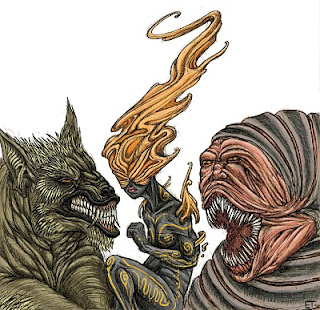 [Image courtesy Loki's Children: (graphite on paper/color by corel painter) ]
Anyway, Jörmungandr full siblings were; Hel (humanish woman) and Fenrir (a giant wolf). I am particularly interested in Fenrir, mainly because one of my favourite authors JK Rowling, chose to name  her werewolf after him (Fenrir Greyback). Rowling is always clever with her use of mythology.
I will say that Jörmungandr also had a number of half-brothers, from Loki's wife Sigyn. One of these half brothers turns into a wolf and disembowels the other. Nice family. However, the most bizarre fact about Jörmungandr's family is that his father, when in the form of a mare, actually gave birth to an eight legged horse named Sleipnir - who rather horrifically, was fathered by an enormous stallion.... seriously, the mind boggles.
Anyway, Loki's three children by the giantess were all thrown into the ocean by Odin (a fellow God).  In the ocean, Jörmungandr grew to immense size. He apparently grew so large his body ran the circumference of the Earth and he could place his tail in his mouth.

Naturally all great Serpents must have an enemy, and in this case Jörmungandr's arch enemy is the God Thor. Legend has it that the last meeting between the serpent and Thor is predicted to occur at  Ragnarök (an epic battle for supremacy) when Jörmungandr will come out of the ocean and poison the sky. Thor will kill Jörmungandr and then walk nine paces before falling dead, having been poisoned by the serpent's venom.

There isn't anything particularly unusual about Jörmungandr as a serpent, with the except of his massive size and his unique family. Most cultures have a serpent mythology. If you're interested in sea serpents (and seriously why wouldn't you be?!)  Here are some other very interesting serpent like beasties to check out.

I got this massive list from the Mythical Creatures List - which is a great resource if you're looking for something unusual to ad to your creature data base!

If you liked the one's above, I'm sure you'll find something even more exciting there.

Have a wonderful week!