Zombies and Dead Creatures of Myth.

I am fascinated, or perhaps horrified by the resurgence of interest in Zombies... particularly books that categorise themselves as zombie romance... I realise that in most cases the Zombies aren't the romance characters but still... the label "zombie romance"... eeeeew. So to improve my ignorance on the matter, I've decided to do a little research on Dead Creatures of myths, focusing primarily on the Zombie but also touching on some of the others.

As we've established, Zombies have been a fixture in literature and film for many years.  Mary Shelley's Frankenstein; a Modern Prometheus (1818) is often attributed to starting the trend.
Since then, there have been numerous zombie films and books, from Night of the Living Dead (1968) to the Resident Evil film series that started in 2002 and is still going on strong. The walking dead hold a place in the collective imaginations of the world.

Zombies
Versions of zombies appear in the folklore of many world cultures dating back to prehistory.
The etymology of the word Zombie is unclear.
-Some sources say was first used around 1871, from the West African origin (cf. Kikongo zumbi "fetish;" Kimbundu nzambi "god"), originally the name of a snake god, later with meaning "reanimated corpse" in voodoo.
- it may also hail from Louisiana creole word meaning "phantom, ghost,"
- or from Spanish sombra "shade, ghost."
-or Haitian Creole - zonbi
-or North Mbundu - nzumbe
References: here and here

Needless to say, the term is often applied to describe a hypnotized or reanimated dead person without of conscious thought and self-awareness, yet is mobile and able to respond to surrounding stimuli. 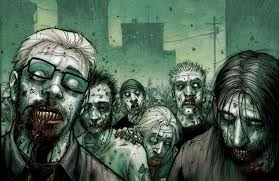 The mythological hero Gilgamesh (who hails from ancient Mesopotamian myth) is said to have spurned the advances of a rather vindictive goddess Ishtar who threatened to to mete out her revenge on him by allowing the dead to go up and eat the living. (Sounds like an ancient Zombie Apocalypse to me!)

In France during the Middle ages it was believed that a person who had been murdered may rise from the grave to avenge the crime.
It is interesting to note that zombies in most cultures can be returned to grave by sprinkling salt on them, or on their grave, or by the sorcerer or witch revoking the spell. 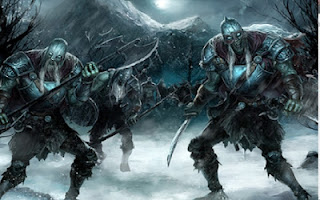 The draugr come from Norse mythology and were the animated corpses of Viking warriors returned from the dead to attack the living. As the Vikings were buried with considerable wealth and weapons the draugr guarded their treasures fiercely. They were believed to have supernatural strength after they emerged from the grave as eerie wisps of smoke. They killed living things by crushing them, eating them and drinking their blood. 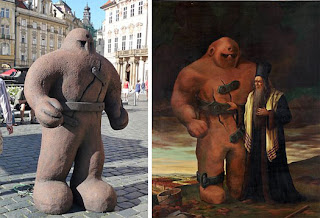 In Jewish folklore, a Golem is an animated artificial man. Not really a zombie however. The word comes from the Hebrew word gelem which means 'raw material' [Rosen, B., 2010, pp 203]. Traditionally made from clay and animated through magic or religious words being written on its forehead or on a piece of paper in its mouth. There are tales in which medieval European rabbi's  created and animated Golem's to do their bidding. The most famous of which was was created by Rabbi Judah Loew a 16th Century scholar in Prague. According to the legend which is remarkably 'frankensteinesque', Loew created the Golem to protect the residents of a Jewish ghetto from harm. Alas, the creature turned violent and began killing non-Jews before turning on its creator.

Of course there are other dead creatures of myth, here are a few others that come to mind.

Toyol: Malaysian mythology.(Also known as tiyanak in Philippines, Komon-tong/lay in Thailand). The Toyol is a dead fetus/baby that is reanimated and may work with a Bomoh (witch doctor) or other person who feeds it (breastfeed it blood, give it cups of milk etc). The Toyol can be dangerous or mischievious.
Banshee: Celtic mythology, female spirit omen of death (often dressed in bloody rags).
Vampire: Really, do I need to write anything here? The market is flooded with them.


And on that note...enjoy your weekend.