I've written about the Vietnamese Unicorn, and today I'm looking into the rather unusual Mongolian Unicorn - called the Poh. 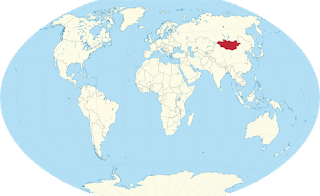 As a child I was fascinated with unicorns, and desperately wanted a unicorn toy - I never got one, but the interest in them probably helped spark my interest in the paranormal and mythical world.
In the west, the legendary unicorns are typically white horses with a singular twisted horn in the center of the head. They were generally said possess magical powers, and horns were allegedly useful for prolonging life or some other mystical benefit.

This is not so in Asia. The Unicorns of Asia vary greatly, from the no horned Vietnamese unicorn, to the ferocious, carnivorous Poh of Mongolia.

Mongolia is a country which I would love to visit, the country of the amazingly sucessful Genghis Khan, stark and stunning landscapes with rich fascinating culture.

Turko-Mongolian mythology is essentially monotheistic (having only one God). The Supreme Being is Tengri  or the Sky personified. The Turko-Mongols believed in the life of the soul after death and in the power of shamans to communicate with spirits.
A noticeable trend in this mythology is that people (such as Genghis Khan, Alp Kara Aslan were born of ancestors created from of human and animal (sometimes even plant) combinations. So it is of little surprise that the Poh, is hybrid creature, rather than a distinct creature in its own right. 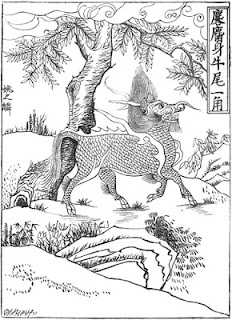 The Shan Hai King (also known as the Shan Hai Jing 山海經) is an approximately 2000 year old book of Chinese folk law, myths, geography etc, that that describes the Poh as an animal living in the plains of Mongolia. The Shan Hai King describes the beast as a hybrid, with the horse like features, with a white body, black tail, one horn, teeth and claws like a tiger and howls like the roll of a drum. The Poh is also described as eating tigers and leopards, and usful when trained for being used instead of soldiers during battle.

Other texts allegedly speak of districts being invaded by ferocious animals, and the Poh coming to protect the good citizens.

In many ways this makes the Mongolian Poh similar to the Vietnamese unicorn in that it defends and protects against invaders. The notable theme in Asian unicorn symbolism is that of the defender, quite a contrast to the European unicorn who is alternately viewed as peaceful and mystical, or strong and proud and only placated by the touch of maiden. 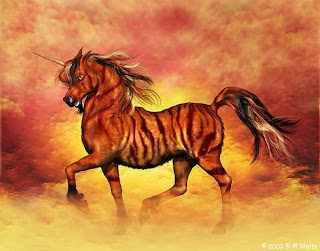 And on that interesting thought, I bid you good day.
﻿